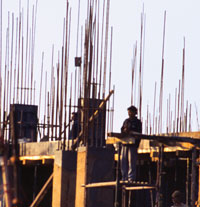 GOVERNMENT circles seem to abound with good intentions these days. Especially with respect to the environment.

The drive to correct past mistakes has acquired extra zeal. For example, a new draft policy to regulate wetlands begins with the lament that the country has lost a third of its wetlands (see p20). The draft has drawn enough flak for being another piece of effete paperwork. One should, however, bear in mind that for long the country did not have specific laws for wetlands. Pieces of legislation such as the Wildlife Protection Act, Forest Act and the Coastal Regulation Zone did impinge on lakes, marshes and swamp. But these were not enough to prevent the misuse of wetlands.

In many Indian cities, a population glut has lead to a mad rush for reclamation of wetlands. Some of India’s best known residential areas were built by reclaiming wetlands. Salt Lake City in Kolkata, for example, was built over 2,000 hectares of swampland in the eastern fringes of the city. Many wetlands in Mumbai also fell prey to the construction boom.

There seems to be some desire to correct the mistake, at least on paper. Construction work on wetlands has been put on the proscribed list. It’s a bar with a familiar caveat, though. The government could still reclaim wetlands if it found that desirable in national interests.

But even here, it has not gone against its current mood. In case a wetland is reclaimed, an area double that size will have to be set aside for ‘creating’ wetland.

Good intentions, however, do not always count much. Wetlands are complex ecosystems. A majority of Indian wetlands remain unstudied. The government has so far found it difficult to distinguish terrestrial and aquatic ecosystems. But national interests inspire Herculean deeds. Maybe it will make the government think out of the box.

The desire to mend matters also lies at the heart of another recent government endeavour. Having ignored Pushkar lake for decades, the government decided to reclaim its bequeath (see p37). Unlike the wetland case, though, it was not curtailed by lack of knowledge. It is well known the lake draws primarily from underground aquifers. But the zeal to improve often transforms into an obstinate desire. Sometimes the results are heroic, most times they are tragic.

On current evidence the move to restore the Pushkar by building concrete channels to get water from its catchment— and not bolstering its aquifers—seems to be going the second route. But we would like to be proved wrong.

Who should not endorse?

The mood to do good has caught up with ministers as well. The Union Minister for Health and Family Welfare, Ghulam Nabi Azad, got himself a shot of the H1N1 vaccine at the vaccine’s launch by Cadilla Healthcare Ahmeda - bad on June 3, 2010. It’s a little too early to predict the results of the action. But at Rs 350 per dose the vaccine in question is expensive. Its efficacy is not fully investigated and even its need remains controversial, with some saying that H1N1 is not as big a problem as some WHO officials decided to portray.

Azad has illustrious predecessors. In 1990, the British agriculture minister John Gummer fed a hamburger to his four-year-old daughter to assuage fears of mad cow disease. Of course, doubting Thomases said it was under pressure from the meat industry. And they were vindicated when the disease killed many.

Even then let us suspend our doubts for a while. Or at least give the do gooders the benefit of our doubts.