Doing away with wood

In Niger and Mali, where timber is scarce and expensive, mud building is making a headway, thanks to the efforts of a French organisation called Development Workshop. 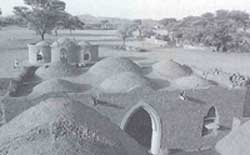 INHABITANTS of the vast Sahel desert need no longer wander in search of wood -- a scarce and consequently, expensive commodity in a desert -- when they construct a house. They can instead build woodless domed and vaulted roofs made entirely of mud, thanks to a technology developed by a French development organisation called Development Workshop, which has been working in Niger and Mali since 1980.

Today, the Sahelian landscape is dotted with "woodless" houses. Realising the great potential of mud construction, earlier this year, Development Workshop launched a five-year programme to train local masons in these techniques.
The basic elements in the woodless designs are vault and dome roofs built without shuttering -- scaffolding used to support a flat roof whilst it is being laid -- and masonry arches. The earliest designs used a familiar material -- sun-dried mud bricks without additives. The techniques now developed are relatively easy to teach and use, and one can play around with the scale, design and sophistication of the finishings.

The woodless technique obviates the need for importing basic construction materials. It uses earthen blocks, which need neither cement, lime nor presses to make the blocks. Where possible, the block-laying patterns are adapted to suit traditional block sizes to make production easy.

Despite the fact that these building techniques suit the changing Sahelian environment, Development Workshop experts John Norton and Peter Tunley reckon that several "soft" factors also played a role in its gaining acceptability amongst local masons and inhabitants.
For one, Development Workshop was not alone in espousing the cause of woodless housing. At the time, the Worldwide Fund for Nature (WWF) and the World Conservation Union (IUCN) were running a project in Sahel aimed at removing conflict between the people and their environment, and woodless construction fitted well into their scheme of things. The project funded the construction of vaults and domes for their own needs, and subsequently the training of local masons.

By 1988, woodless houses had become quite popular -- some 100 masons had been trained and several hundred buildings had come up, most of them owned by private individuals. Even more encouraging, say Tunley and Norton, was the fact that several of these buildings -- houses, kitchens, storerooms, and even a mosque -- had sprung up spontaneously, constructed by local masons who used the techniques to meet their own needs.

The popularity of the technique, explain the experts, is also partly because time and opportunity were given for experimentation and dialogue. Small structures built in new regions could be monitored over one or more rainy seasons to see how they bore up. Consequently, during the 13 years since the technique was brought to Niger, the construction methods have been considerably refined to increase strength and safety, to better protect it from water, and to make the art of building easier to learn and use.

In the new five-year programme, Development Workshop will set up a mobile team of experts to train masons. Its local partners such as village bodies, NGOs and private individuals, will finance the cost of materials and unskilled labour for the "demonstration buildings".