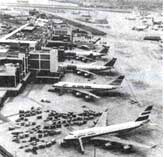 A airport project is threatening the al of the rare pink dolphins that off Hong Kong's western coast. as Chek Lap Kok, a small island off imm that lies to Hong Kong's west, is Z" bulldozed to form a platform for r airport, environmentalists fear that etiging, reclamation, underwater wing and accompanying sewage ri., could kill the dolphins.

The indications are ominous. Pods Iphins, believed to belong to the iw family as Chinese white dolphins se Indo-Pacific humpback dolphins, Le Travelled regularly around 2 islets w-n as The Brothers. As these islets rr blasted and levelled for the airport even single sightings have now L,rne a rare phenomenon.

Environmental concern centres on wruction din. and high frequency w rom underwater blasting. "We're ,1arly worried this could kill ani IN outright. The underwater noise OL juse a massive pressure change," ,earcher Lindsay Porter, who esti Om :hit the dolphins will be safe from only if they are at least 600 wv way. Although contractors pk-ng on the airport project have W it) minimise the hazards of blast -atrolling waters within the dan to check that no dolphins are such assurances cut little ice sceptics. Pryke believes the only pr , an emergency sanctuary off O,at,tern Lantau.

S,ng Kong's agricultural and fishP :,C-artment is, however, not particularly well disposed to such suggestions. According to the department, these measures may turn out to be a waste of taxpayers' money. Conservationists, nevertheless, believe that such officialdom will hasten the cleimise of the dolphins.