A World Trade Organisation (WTO) panel has ruled, on September 15, the “dolphin safe” labels used to market tuna in the United States are illegal because they restrict trade. The labels are used to inform consumers that the tuna fish has been caught without harming or killing dolphins. 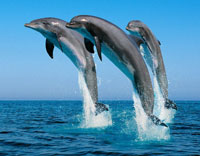 Tuna fishing is a multi-billion-dollar global industry. In 1990, the US adopted a law intended to protect dolphins by encouraging consumers to buy tuna products packaged as "dolphin-safe". It did not allow the “dolphin-safe” labels on tuna caught in the Eastern Tropical Pacific Ocean (ETP) with purse seine nets—named such because along the bottom of the net are a number of rings with a rope passing through; when pulled, the rope draws the rings close to one another, preventing the fish from swimming down to escape the net.

These nets are generally used by the Mexican Fisheries companies. The encircling nets frequently ensnare unwanted marine life such as dolphins along with the tuna. Mexico, which invested heavily in tuna fishing in the 1980s had protested against this labelling and had filed a complaint with WTO in 2008, saying the US was discriminating and unnecessarily blocking Mexican tuna from entering the US.

While the panel did not agree with Mexico on the complaint that the label discriminated against Mexican tuna by nationality, it found that the US dolphin-safe labelling provisions were more trade-restrictive than necessary to protect dolphins. “They only partly address the legitimate objectives (of dolphin protection), pursued by the US,” said the ruling.

The panel also said the dolphin-safe label policy was inconsistent with WTO’s Agreement on Technical Barriers to Trade (TBT). TBT agreement requires that technical regulations “are not prepared, adopted or applied with a view to, or with the effect of, creating unnecessary obstacles to trade.”

There has been a long history of dolphins being killed in ETP.  It became significant in the 1950s when tuna fishermen began to exploit the unique relationship that existed between the tuna and the dolphin. In this zone, the tuna schools swam below the surface swimming dolphins.  The fishermen took advantage of this by developing the purse-seine net fishing method. Fishermen sealed off any escape routes, catching both the dolphins and the tuna in their nets and many dolphins were killed or injured in this process. In 1986, this resulted in the death of an estimated 133,000 dolphins.

The US government responded by passing the Marine Mammal Protection Act (MMPA) in 1972 which required the US tuna fishermen to incorporate the dolphin friendly fishing techniques. The MMPA greatly reduced the number of dolphins killed by US vessels.  However, the total number of dolphins killed did not decline as the neighbouring countries like Mexico dramatically increased tuna fishing with purse-seine nets.

In 1990, the US implemented tuna embargoes for six years on Mexico, Venezuela, Ecuador, Panama, and Vanatu. The same year, it also enacted the Dolphin Protection Consumer Information Act (DPCIA), which stated that producers, importers, exporters, distributors, or sellers of tuna products could only include a dolphin safe label if the tuna were harvested in a manner that was not harmful to dolphin.  Therefore, tuna caught by purse seine vessels in the ETP or tuna taken on the high seas by drift net fishing could not be labelled dolphin safe.

Following this, the Ecuador and Panama complied with the US standards, and the embargoes were lifted. As a result, dolphin deaths in ETP also dropped dramatically—from 423,678 a year in 1972 to 15,550 in 1992. However, Mexico resisted the dolphin safe-measures and challenged the legality of the US Tuna Import Embargoes and the DPCIA before GATT (precursor of WTO) in 1991.

The GATT panel ruled in the favour of Mexico, saying the Tuna Import Embargoes imposed by the US violated GATT provisions on free trade. The GATT ruling was, however, immediately denounced. The California federal district court directed the government to ignore the GATT decision and ruled that tuna imports must be banned from any country which has not, in turn, embargoed Mexican tuna.

However, in 1995, after the US entered the WTO, Mexico threatened a WTO enforcement case against the US for refusing to implement the 1991 GATT ruling. Under WTO rules, consensus is required to stop implementation of a dispute panel ruling. Consequently, the US amended MMPA to allow tuna imports from countries that permit fishermen to use purse seine nets. The amendment also allowed tuna caught with purse seine nets to be labeled “dolphin safe” if monitors on fishing boats did not actually observe any dolphins killed or seriously injured during the setting of the nets. However, the attempt to weaken standards on “dolphin safe” labelling for tuna was rejected by a US district court in 2000.

1972: The US congress passes Marine Mammal Protection Act (MMPA) which prohibits US fishermen from using fishing methods that result in dolphin deaths

1984: The US inserts the “Direct Embargo Provision” in the MMPA to decrease foreign dolphin kills by prohibiting the importation of tuna from nations that do not have regulatory programmes and mortality rates comparable to the US

1988: The US National Marine Fisheries Services found three stocks of dolphins—the coastal, the northeastern offshore spotted, and the eastern spinner were depleted in the ETP due to purse seine fishing methods

1991: General Agreement on Tariffs and Trade (GATT) rules the MMPA provisions were not necessary to protect dolphins. The ruling is overruled by a US district court

1995: Mexico threatens a WTO enforcement case on US if does not implement the 1991 ruling of GATT

1997: The US allows tuna imports from countries that permit the fishermen to use purse seine nets.

Feb 2000: The US allows the ‘Dolphin Safe’ labels on the tuna caught with purse seine nets with the monitoring that the dolphins are not being killed in such cases

April 2000: The district court of the Northern District of California rejects the attempt of the government of weakening the ‘Dolphin Safe’ labeling standards

2008: Mexico with other WTO members files the case against ‘Dolphin Safe’ labels policy of US in WTO