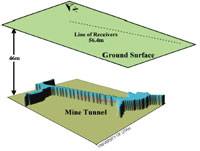 ON MARCH 13, eight miners were trapped and killed inside a coal mine in South Garo Hills, Meghalaya. In February, last year, four miners died of mine collapse in southwest China’s Yunan province. The mine owner called them on their mobile phones and got a rough idea of their whereabouts. But by the time rescue workers could actually locate them they were dead. Researchers have deve - loped a new method that can help. All the distressed miners would need to do is bang the walls of the mine they are trapped in. A research team from the University of Utah, US, envisaged a technology in which base stations are set up at regular intervals inside the tunnel. Each station consists of a sledgehammer and an iron plate bolted to the mine wall. “Each such location when banged will generate a ‘unique seismic fingerprint’,” said Gerard Schuster, professor of geology and geophysics at the University of Utah and one of the authors of the study. The fingerprint will be a vibration or a series of vibrations with a frequency unique to the base station that generates it. Each base station is calibrated according to the seismic fingerprint and the calibration is recorded by a compu - ter. Sensitive sound receivers known as geophones located on the surface above the mine tunnel receive the vibrations generated by a trapped miner banging on the mine wall. The vibrations are matched with seismic fingerprints recorded in the computer to find the location from which the vibration has been generated, said a study of the method published in the March issue of The Leading Edge. Pinpointing the location makes the rescue work less time-consuming and helps save more lives. Schuster felt the need to work on a miner-locating technology after the Crandall Canyon coal mine collapsed in Utah, US, on August 6, 2007, resulting in the death of six miners. He had just returned from a five-month sabbatical in Saudi Arabia, where he had worked on a system using seismic signals to locate underground oil. Vibrations were transmitted underground. When these vibrations collided with the source of oil, the signals that were sent back had to be analyzed to find the location of the oil source. It occurred to Schuster that a similar technology could be used to trace miners. Along with his team, Schuster star - ted experimenting with models of mines. Three tests were made in the University of Utah tunnel. “The mathematical basis was the same, but we were improving the precision of measuring data after each test,” said Sherif Hanafy, the lead author. Later they tested it in a mine in Arizona. “The data we gathered from the tests at the university made it easier for us to get good results while testing in the mine,” Hanafy added. A large mine with about a 100 geophones and 100 base stations would cost an estimated US $100,000. Smaller mines would require fewer base stations and geophones and so the overall cost would be less too. Schuster hopes a company will commercialize the technology. A patent is pending. Ã”Ã»Ã¡