It reacts with disinfectants, can cause diseases including cancer

DO CHEMICALS used to disinfect water harm our health? Evidence suggests drinking water purified with common disinfectants like chlorine and bromine causes urinary bladder cancer. But it was not clear whether the chemicals can affect health when used to keep swimming pools or bathing water clean, until now. 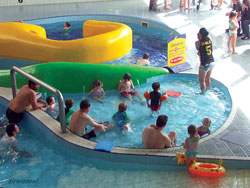 Spanish and US researchers have found that chlorine and bromine react with urine, sweat, hair and dead skin cells to form by-products that could cause several health hazards, from lung diseases to cancer.

In the initial study, researchers led by Susan Richardson of the US Environmental Protection Agency analysed water from two public indoor swimming pools in Barcelona. The pools were treated with chlorine and bromine. They tested the pool water for disinfectant by-products and identified more than 100 chemicals; most were not known earlier. The levels of disinfection by-products were less in outdoor pools because the chemicals evaporate.

To understand the impact of these disinfection by-products on health, another team of researchers led by Manolis Kogevinas of the Centre for Research in Environmental Epdimiology (CREE) in Barcelona, examined 49 people in the age group of 18-50 for biomarkers of genotoxicity.

Genotoxic substances trigger genetic mutation that cause cancer. They collected samples of blood, urine and exhaled air from the swimmers before and after they swam for 40 minutes in a chlorinated pool.

The levels of trihalomethanes, for example, were seven times higher in their exhaled air after swimming. Other indicators of genotoxicity like micronucleated blood cells were also in high levels, the researchers noted in the November issue of Environmental Health Perspectives.

Another study on the same group of swimmers showed serum CC16, a biomarker of lung epithelial permeability that causes lung diseases like lung fibriosis and asthma, increased in healthy adults following swimming.

“Our finding indicates if organic matter is removed before chlorination the amount of disinfectant by-products generated would be greatly reduced,” said Cristina Villanueva of CREE. She was part of all the three studies.

To increase health benefits of swimming, Villanueva suggests, people should adhere to hygiene measures like taking a shower before entering the pool, using hair cap and avoid urinating in the pool.