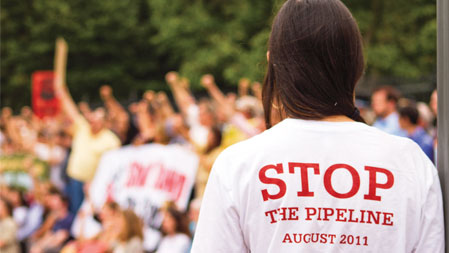 EIGHT Nobel peace laureates have urged Canadian prime minister Stephen Harper to stop the extraction of oil from tar sands in the country. Oil thus extracted is 25 per cent more polluting than ordinary crude oil, according to the European Commission. Canada is home to the largest reserves of the sands.

Recently, the Commission suggested that tar sands oil be ascribed a greenhouse gas default value of 107 grams per megajoule of fuel, compared with 87.5 grams for crude oil. Tar sands are deposits of sand, clay and water saturated with bitumen, a viscous oil. They are mined and processed to extract bitumen which is then refined and diluted to turn it into oil. About two tonnes of tar sands are required to produce one barrel of oil (one oil barrel equals 159 litres). Tar sands contribute to 40 per cent of Canada’s oil production.

In the letter sent on September 28, the laureates, including Archbishop Desmond Tutu, say further exploitation of tar sands will dramatically increase the amount of greenhouse gas emissions. “If no action is taken, it will make turning the clock back on climate change impossible,” they add. But Canada seems reluctant to give up on the sands. It dismissed the Commission’s rating of the unconventional fuel, calling the move discriminatory.

The letter comes three weeks after the laureates and a group of scientists wrote to US President Barack Obama, urging him to reject the permit of a proposed pipeline. The 2,673 km Keystone XL pipeline is said to carry 830,000 barrels of tar sand oil per day from Canadian province of Alberta to the US, says James Hansen, a NASA scientist. Canada’s tar sands deposits are located in Alberta. Hansen along with several other activists was arrested in August while protesting the pipeline outside the White House. The Canadian sands are a “ticking carbon bomb”, he says. “If they are exploited as projected it would be game over for the climate,” he adds. A WWF report says European companies, including Shell and Total, will invest about US $379 billion in Canadian tar sands between 2010 and 2025.

The mad rush to explore tar sands is not restricted to Canada alone. London-based BP is exploiting tar sands in Venezuela, which has the world’s largest tar sand reserves after Canada. Its main licence is in Petromonagas block which currently produces 110,000 barrels per day. In 2010, Italian company ENI joined hands with Venezuela’s state oil firm PDVSA to develop the Junin block in the South American country which holds about 35 billion barrels of oil. The plan is to produce 75,000 barrels per day by 2013. In 2008, Shell along with a Russian company decided to exploit 100,000 barrels a day from Russia’s tar sands fields. In 2009 it processed over 18,000 tonnes of the sands, according to Amsterdam non-profit Friends of Earth International (FOEI).

Why the rush? The International Energy Agency gives a reason. It says production from existing, conventional oil fields will decline by half by 2020 due to overexploitation. This supply gap will be met by coal and unconventional oil, with the latter providing about 11 per cent of total oil output by 2030. More than half of this amount is expected to come from Canadian tar sands.

A 2010 report by FOEI says exploitation of tar sands in Canada has caused water pollution and destroyed swaths of forest. There is also a rise in the number of cancer cases in Alberta, as per the report.

But oil companies such as Shell say they use technologies like Carbon Capture and Storage (CCS) to cut emissions. CCS involves storing greenhouse gases underground rather than leaving them in the atmosphere. FOEI says even if CCS technology is successful in reducing emissions its cost is very high at US $290 per tonne. “It would be better if these investments are used in renewable energy,” says FOEI. It recommends that policy makers should discourage investment in energy sources that would re-carbonise economies. “Cleaner fuel production should be encouraged by taxing the entry of high-carbon energy products,” adds FOEI.