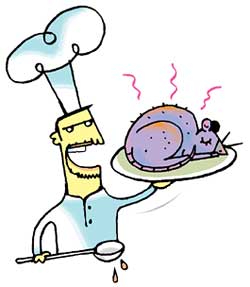 HOW about rat burgers, rat tail pasta or baby rat keema for dinner? It may become a reality in Bihar if the state government pursues its latest obsession with rats. The state plans to promote rat meat as a source of protein that "will solve the global food crisis" and provide employment to the Musahar (rat-eating) community, considered the lowest in social order in the state.

Bihar's social welfare department has prepared an elaborate blueprint that will place rats alongside chicken and mutton in all eateries, from roadside dhabas to five-star hotels.

Rat meat is the staple diet of over two million extremely poor Musahars in the state. "Chicken and mutton were promoted but rat meat remained a poor man's diet because policy makers forgot to elaborate on its nutritional value. We are going to commercialize rat meat production that has a huge demand across the globe," said Vijay Prakash, principal secretary of the department. Rat meat is sold as patal baguri in Bihar.

The government plans to set up rat farms in Naubatpur, Danapur and Nasariganj, using Musahars' expertise. In the first phase, the department aims to export rat meat globally and in the second phase, introduce delicacies in the country. The department claimed that rat-eating countries, such as China, Vietnam and Congo, were ready to procure rat meat on a large scale. "We are expecting that rat farms will start production by the end of 2008. These farms will initially employ about 1,000 musahars," Prakash said.