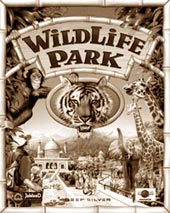 A few years ago there was Zoo Tycoon that allowed you to take charge of your own virtual zoo. You had to look after the animals and customers. The animals had to be satisfied by pairing them up with mates, and you had to make sure their enclosures met the correct conditions. Now you get another virtual adventure by the German-software developer Novartix. Wildlife Park includes 20 campaign scenarios. The first 4 of these scenarios though are tutorials and scenarios 5-7 are very basic stuff. The other 13 scenarios range from fairly easy to downright difficult and will have you proving your zoo keeping abilities in a range of environments such as Central Europe, Tanzania, Russia and China. You have to keep your eyes on everything: a bigger enclosure for the penguins, visitors demanding more recreation areas, your bank called twice because you have to pay the mortgage for the zoo estate and animal protectors rioting because they want tiger Bruno to get a girlfriend. Besides, you have to command an armada of gardeners, rangers, nurses, animal trainers, paramedics and guards. So, play it but don't take your self seriously.