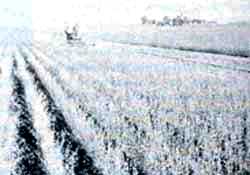 A US ecologist has warned that certain species that seem to be faring well may already be doomed to extinction in the next 100 years or so, even if their remaining habitat is preserved. "Given the habitat destruction already done, we've already incurred a massive 'extinction debt'," says David Tilman of the University of Minnesota. Equally disturbing is the finding that the species most likely to vanish are the best competitors in the habitat (Nature, Vol 371, No 6492).

Tilman's predictions are based on a mathematical model that shows a definite relationship between habitat destruction and extincland communities, specifically the old fields and prairie at Cedar Creek Natural History Area in Minnesota. The model describes each species as a set of small, local populations that live in scattered sites but are linked by their ability to disperse seeds and sprout in distant places.

Tilman has found that diversity losses were relatively modest even after a large proportion of habitat - 50 per cent or more - was destroyed. But at a certain level, increasing habitat losses led to a dramatic rise in extinction rate. 'The good news is that if you destroyed half the Earth, you'd lose only about 10 per cent of the species, " says Tilman. But the bad news is as you near 60-80 per cent habitat loss, a very slight increase in destruction leads to a sharp increase in the number of species lost."

But most alarmingly, as extinctions occur, ecosystems disproportionately lose the species best adapted to use the resouices in those habitats. That's worrisom6'because top competitors are valuable members of ecosystems, often playing a key role in sustaining productive habitats.

Tilman's work shows that the best competitors for resources are also the poorest at dispersal. For example, bluestern grasses have extensive roots and outcompete their neighbours in absorbing nitrogen from the soil. Because these grasses pump so much energy into their roots, they produce relatively fewer seeds.