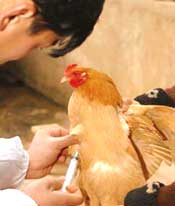 A mid pronouncements of a possible global bird flu pandemic by scientists from the West, reports came in from China on May 27, 2005, indicating a dangerous spread of the disease there. Director general of Chinese agriculture ministry's veterinary bureau, Jia Youling, said the number of migratory birds recently killed by a bird flu strain, that also affects humans, was five times more that earlier thought. China is also grappling with fresh outbreaks of foot-and-mouth disease, which affects cattle, in three new areas. Chinese authorities claim the situation is in control.

Jia Youling said the h5n1 strain of bird flu had killed over 1,000 wild birds in the remote northwest province of Qinghai. The earlier reported toll was 178. "We have been preventing domestic fowl and people from having contact with wild migrant birds," the official added. To control the spread of foot-and-mouth disease, more than 800 cattle were killed and incinerated in Beijing, Hebei and Xinjiang, he said.