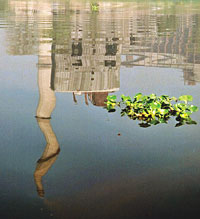 AWAY from the conference rooms of climate talks, developed countries have begun arm-twisting developing countries to reduce their dependence on fossil fuels.

Sasan, a coal-based project of Reliance Power, almost lost out on funding from a US-based lending agency (See: US bank uses carbon smokescreen). Earlier in the year, power plants in South Africa and Pakistan faced similar opposition. While climate negotiations are going thro ugh a dark alley, civil society and governments of the North toy with the dev elopment goals of their poorer cousins.

Emissions from coal-powered plants, its true, are a major cause of global warming. Replacing coal, however, is a tough proposition. Renewable power is cleaner, but unreliable and in the current market costlier. Nuclear power comes with its own drawbacks, including waste disposal and radiation fears. For developing countries, especially India, where more than half its population gets little or no electricity, coal appears to be the only short-term answer. More so because rich countries have not fulfilled the obligation to fund and transfer new and cleaner technologies. At the same time they pursue a growth trajectory that relies on coal. US alone will establish 60 coal-fired power plants in coming years.

Coal will steam India into the next decade as well; more than 100 power plants are in various stages of planning. Coal-powered plants are a contentious issue even at home. Jindal Power Limited’s plant in Raigarh (See: Jindal pays for flouting law) and GMR Power’s proposed plant in Raipur (See: GMR jumps the gun) have been pulled up by the environment ministry for starting construction before getting environmental clearances. Another power plant owned by Jindal in Ratnagiri is facing opposition from people in the area. Local conditions need to be respected before setting up these plants and mitigation measures adopted before clearances. The Ratnagiri plant will affect cultivation of the prized alphonso mangoes unless pollution is arrested. Raipur and Raigarh are already brimming with industrial activity. Pollution there has passed tolerance levels. These are not the best locations to set such units. While industry works for profit, the government needs to tread a cautious path, lest the indirect costs of using coal overtakes its so-called development benefits.

Criticism in hindsight is not always fair. But it does not hold true for a lot of recent criticism of the World Health Organization (WHO). It has been involved in far too many controversies to deserve benefit of doubt. The speed with which WHO labelled swine flu pandemic last year was surprising. Swine flu symptoms are similar to that of common flu and sure there was no scarcity of victims. But now media reports say health experts who advised WHO on the H1N1 outbreak had close connections with the pharma industry. This sharing of experts between private and public bodies might have led to an unnecessary scare, leading to wastage of public money. Most drugs and vaccines procured to contain H1N1 outbreak lie unused. WHO denies it shares experts with the pharma industry. But the H1N1 episode is not a one-off case.

Pneumonia cases in India are not well documented, but the Union health ministry and WHO are pushing a pentavalent vaccine against pneumonia. Although there are question marks on the vaccine, the global health watchdog has changed the definitions in its testing protocols to give the vaccine a clean chit (See: Officials push five-in-one vaccine). WHO also promotes ready-touse food for malnutrition and the patent holder of the most widely used therapeutic food, Plumpy’nut, is one of its consultants.

WHO, it seems, could do with a bit of transparency.