The chronically depressed are more likely to develop cancer 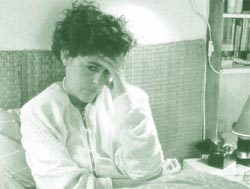 stressful events are inherent to human existence. The death of a loved one, breaking up of an important relationship, losing a job, financial problems and loss of health or independence. All people undergoing such events are at a high risk of developing depression. While such events make life difficult, people find ways to get through such periods more often than not. But for some, such an event can lead to depression, a medical condition that can affect both mental and physical health, and it is not always easy to identify the cause. Depression has been linked to a whole range of physical ailments. A recently published study shows that chronic depression may lead to an increased risk of developing cancer.

Depression is more than a bout of "the blues" -- a serious illness that can take a terrible toll on individuals and families. If not treated, depression can result in disability, dependency and, ultimately, suicide. Scientists also suspect a link between depression and heart disease. And then there is the risk of cancer.

A team led by Brenda W J H Penninx of the National Institute on Ageing in Bethesda, Maryland, usa , has recently found that those suffering from long-term depression are 90 per cent more likely to develop some kind of cancer than those not prone to depression. The risk of cancer persisted even after adjustments were made in the study to account for age, sex, race, disability, hospital admissions, alcohol intake and smoking. The authors conclude: "When present for at least six years, depression was associated with a generally increased risk of cancer" ( Journal of the National Cancer Institute , Vol 90, No 24).

How does depression increase the risk of cancer? Experts postulate that depression is caused by imbalances in brain chemicals called neurotransmitters, three such chemicals being serotonin, norepinephrine and dopamine. Yet the exact nature of the link is not known. It could be that the imbalance causes a decrease in the number of infection-fighting cells, such as lymphocytes and natural-killer cells. Neurotransmitters also control the secretion of hormones such as oestrogen, progesterone, cortisol, melatonin and endorphins, which affect mood and emotional conditions. But, again, the exact biological mechanism is not known.

Possibly, something in the cancer development process causes depression or there may be another unknown factor associated both with depression and cancer, says Daniel Hayes, director of the clinical breast cancer programme at Georgetown University Medical Center in Washington, dc . While the new results do not prove that chronic depression causes cancer, they show that long-term depression is indeed associated with an increased incidence of cancer, Hayes points out.

Penninx and her colleagues analysed data from 4,825 men and women above the age of 70. The volunteers were interviewed in 1982, 1985 and 1988 to determine whether they suffered from depression. In 1988, when the average age of the volunteers was 79, all of them were free of cancer, while 146 had suffered from long-term depression.

The volunteers were examined for another four years. In this duration, 402 of them developed some kind of cancer or the other. Compared to those who showed no signs of depression, the chronically depressed were almost two-and-a-half times more likely to develop cancer. According to Robert T Croyle of the National Cancer Institute in Bethesda, Penninx and her colleagues "present the most compelling evidence to date that depressed mood heightens the risk of cancer".