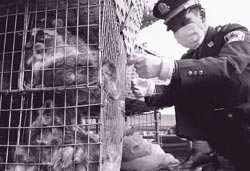 china has reported the first case of severe acute respiratory syndrome (sars) since July 2003, when it was declared over after killing over 800 people -- about 350 of them in China. The World Health Organisation (who) confirmed on January 5 that a 32-year-old television producer in the southern province of Guangdong had sars. The patient has since recovered fully. On January 8, health authorities said a waitress hospitalised in Guangdong's capital Guangzhou could also be infected. Suspected sars cases have been reported recently from the Philippines, Taiwan and Singapore as well. sars first appeared in Guangdong in November 2002.

The fresh outbreak is suspected to have spread from civet cats. China banned eating and selling civets in May 2003 but relaxed the ban in August. The Guangdong government has now stopped selling and cooking of civets, ordering that all living civets be killed before January 10.

But it's quite likely that the culling will be totally ineffective. Albert Osterhaus, virologist at the Erasmus Medical Center in Rotterdam, says it has yet to be proved that the disease spreads through civet cats. He adds that there are many other animal vectors of the virus. who fears that a cull could be counterproductive, exposing people to the animals' blood. Livestock traders in China fear the sale of other animals also plunging because of the large-scale culling.

Meanwhile, South Korea has reported an outbreak of avian flu caused by the dangerous h5n1 viral strain. The strain is capable of skipping to humans. It caused a major health scare in Hong Kong in 1997, killing six people and forcing the authorities to kill millions of chickens. The outbreak in Korea spread over the past week through the transport of chickens and ducks from infected breeding centres. As there is still no vaccine for the disease, Korean authorities have also resorted to killing millions of ducks and chickens. Reports from Taiwan say six ducks smuggled from China had the h5n1 strain and were immediately destroyed. Vietnam too has reported bird flu -- nearly 60,000 chickens have died from a mysterious virus in two southern provinces and another 400,000 are feared infected. "We are taking urgent measures because this epidemic could threaten all the Mekong Delta," said local government official Nguyen Duy Long.

The panic has affected business. In South Korea, retail sales of chicken have dipped by 30-40 per cent. The farm ministry had to buy 2.5 million chickens to support poultry businesses. The country's exports of 300,000 chickens and 3,000 tonnes of chicken meat worth around us $7.8 million have been hit.

Despite the culling, the disease spread from Umsong, about 70 kilometres (km) southeast of Seoul, to the South Cholla province, about 275 km southwest of the capital. And within 10 days. The cull is also not likely to help because of the huge numbers of animals -- there are around 100 million chickens and eight million ducks in South Korea alone. Preventive methods like increased sanitation, better breeding practices and proper quarantine are not being focused upon.