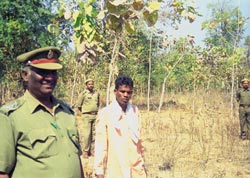 it's time for a shake-up in the forestry sector of India. Two major developments promise to alter the very character of forest management in the country. As a consequence, the lives of millions of people who depend on natural resources for their livelihood could also be transmogrified. One of the proposed measures -- the creation of a national forestry reforms commission --remains in the realm of conjecture. The second development -- the new National Afforestation Programme (nap) -- has already raked up much criticism.

To be headed by an "eminent person", the commission would possibly include the secretary, Union ministry of environment and forests (mef) and the director general (forests and wildlife), mef. M K Sharma, who holds the latter post says: "The commission will have powers to call upon experts from various fields." The lack of transparency in the formulation of the commission, though, has raised the non-governmental organisations' (ngos) hackles.

Meanwhile, forestry experts and ngos are up in arms against the nap, which will club three major programmes of the National Afforestation and Ecodevelopment Board (naeb) as per the 10th five-year plan to be adopted by National Development Council.

nap will be fully sponsored by the Union government. Joint forest management (jfm) institutions will be the key implementing agencies under it and a new body called the Forest Development Agency (fda) will be created at the state-level to monitor the working of the jfm committees. But experts allege that the new plan will centralise forest management further in the country. "The programme is a death sentence for jfm," says Madhu Sarin, a forestry expert.

The main objection to the new programme is that the fda will have overriding powers, thus curbing the jfm committees' autonomy. The fdas will be headed by the state's conservator of forests, who will have the power to nominate other members -- including the 50 presidents of jfm panels. V R Sowmithri, convenor of the Andhra Pradesh Community Forestry Management Committee, a state-level body of organisations working on jfm, says, "Currently, the jfm programme survives on the government's whims. Adding another centralised scheme to it definitely spells trouble."

However, V K Bahuguna, officer-in-charge of mef's jfm cell, is confident that the new scheme will not affect the autonomy of the jfm bodies.