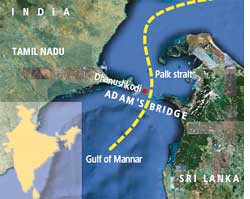 THE feasibility report for the Sethusamudram ship canal project, linking Palk Bay and Gulf of Mannar, is likely to be discussed in the Supreme Court in the third week of December. The court will hear the governments response to the report of the National Institute of Oceanography (nio) in Goa that has recommended a detailed environmental impact study before going ahead with the project.

On July 30, 2008, the apex court while reserving its verdict on a bunch of petitions challenging the project had asked an expert committee headed by environmentalist R K Pachauri to study the feasibility of an alternative alignment to avoid damage to the Ram Setu or Adams Bridge, made of limestone shoals. The alignment4Acuts through a bar-shaped spit land extending into the sea from the coast of Dhanushkodi in Tamil Nadu. The alternative route was proposed due to objections to the alignment cutting through Ram Setualignment 6.The expert committee outsourced the study to nio.

In its report, nio said the canals impact could not be studied as there isnt enough data on currents, sediment transport and bathymetry (measuring depth of the water). nio developed simulation models based on meagre data that showed there is no major difference between alignment 6 and 4A except that the second one would need more maintenance dredging. Both canals would interfere with sediment transport that occurs from west to east. In alignment 4A, the sediment would accumulate in the canal instead of east of the canal where the spit will erode, nio said.

The nio study is inconclusive whether the project would impact marine life in the Gulf of Mannar. The third part of nios terms of reference was to evaluate the impact of cyclones on the canal. The researchers found that cyclones would pose a threat to the canal as Tamil Nadu is prone to cyclonic activity; the 1964 cyclone destroyed a part of Dhanushkodi. nio said damage due to cyclones would be more in alignment 4A as it will affect the stability of the spit that acts as a barrier.

The report was submitted last March but the government has not acted on it, said Janata Party leader Subramaniam Swamy who questioned the delay in the court. The government seems to have lost interest in the project, said N Pushparayan of East Cost Research and Development, a non-profit in Tuticorin. The report is a preliminary response; based on this we will file an affidavit soon, additional solicitor general Harin Raval said.