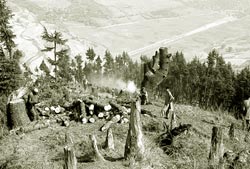 with the recent notification of the Compensatory Afforestation Management and Planning Agency (campa) by the Union ministry of environment and forests (moef), several unresolved issues regarding compensation for deforestation have resurfaced. Significantly, from now onwards, the moef will control all such money instead of the states.

The new body has been formed following an October 2002 directive of the Supreme Court (sc). The apex court also ordered the creation of a single interest-bearing fund in which each state will have a ledger. The main objective of these steps is to streamline the collection and handling of funds collected in lieu of deforestation, and make the process more transparent.

campa will function through a 21-member governing body, chaired by the Union minister of environment and forests, and a seven-member executive. The latter will be headed by the director general (forests). An independent monitoring cell will also be set up to oversee the afforestation work and utilisation of funds. Importantly, campa can order inspection and financial audit of works. It can also tighten the purse strings when required.

"Environment and forests could well become a self-sustaining sector as a result of certain significant moves, with campa at its helm," says M K Jiwrajka of the Central Empowered Committee (cec), the body constituted by the apex court that recommended the formation of campa. But the moef has not followed the cec's recommendation on ensuring a strong presence of non-governmental organisations (ngos) in the agency. It has instead included a "professional ecologist" in it, raising many eyebrows.

"Not only should there be knowledgeable community representatives, but given the confusion regarding the legal status of forests, senior representatives of revenue and tribal welfare departments should also be included," says Madhu Sarin, an environmental journalist.

That the formation of the new body is important can be gauged from the fact that it will deal with big money. The sc order required the collection of "net present value (npv)" for forests. npv makes it mandatory for "user agencies" like state public sector undertakings, mining corporations or private sector companies to pay Rs 5.8 lakh to Rs 9.2 lakh per hectare (ha) of diverted forestland depending on its quality and density. With moef figures suggesting that an average of 35,000 ha is diverted annually, " campa could be dealing with amounts as huge as Rs 2000 crore per year," says Jiwrajka.

However, the moef, despite having formed campa, questions the very basis of npv. "It is an arbitrary figure and it has neither been given nor approved by us," points out V K Bahuguna, inspector general (forest), moef. The ministry is even backing large players such as the mining and irrigation sectors in their demands for exemptions. Experts believe that there is indeed a strong case for waivers for some projects, but this should be strictly based on the purpose for which the forestland would be used. According to unconfirmed reports, the cec would be willing to consider exemptions for smaller public utility projects, covering up to 5 ha.

Charging npv for land distributed among tribals is another contentious matter. Kerala will have to pay about Rs 500 crore npv for diverting 7,693 ha of forestland for this. M A Kuttappan, the state's minister for welfare of scheduled castes, scheduled tribes and backward classes, says this is unfair.