Dow and the Blue Planet Run 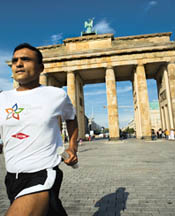 On August 1, protestors lined up streets of San Francisco against Dow Chemicals involvement in the much-acclaimed Blue Planet Run. The run began on June 1. Twenty runners will circumnavigate the earth's Northern Hemisphere, passing through 16 countries in 95 days. The run will conclude in New York on September 4. It aims to "educate local residents about the water crisis."

The San Francisco protestors have no quarrel with the project's aim. But they are vehemently against Dow's involvement in the Blue Planet Run. The us-based chemical company is amongst the chief sponsors of the run. "Our message Clean water yes, Dow no. We support the Blue Planet project and runners..and the cause of clean water, but want Dow to make a 180 degree turn," the protestors said.

They link Dow's support of the run to its "Human Element" advertising campaign, an aggressive attempt to re-brand Dow as a green and humane company."Dow's beautiful ads stand in stark contrast to the dirty real impacts of the world's largest chemical company," said representatives of the Down Accountability Network one of the groups protesting the chemical giant's role in the run. "What the runners and many supporters of Blue Planet Run either don't realise or refuse to acknowledge is Dow's long history of destructive practices that continue to chemically contaminate just about every place on the Earth. The corporation refuses to be accountable for its actions and denies liabilities," they said.

Other groups involved in the protest include Pesticide Action Network, Amnesty International, Commonwealth Students for Bhopal and Association for India's development.