Dow Chemical asked to clean up contaminated sites in the US 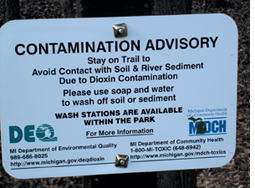 dow Chemical has been asked to clean-up its act in the us. It's been charged with spreading contaminants. This comes soon after a row in India over shifting of toxic waste from the Union Carbide factory (owned by Dow) in Bhopal to a facility in Gujarat (see 'Eyewash', Down To Earth, July 15, 2007). On June 27, the us Environmental Protection Agency (epa) notified Dow that it must immediately start cleaning up three dioxin-contaminated hot spots located along almost 10 km downstream of its plant in Midland, Michigan, by the Tittabawassee river.

The Dow plant is spread over 769 hectares.Dow has operated its manufacturing facility on the shores of the river since 1897, and over the years, it has manufactured a number of chemicals, including mustard gas, Agent Orange, napalm, and pesticides like 2,4,5-trichlorophenol, 2,4-d and Dursban (chlorpyrifos), which create dioxin as an unintended byproduct during production and/or disposal.
Studies conducted in 1986 at various locations including schools, parks, and community areas showed elevated levels of dioxin, which prompted issuing advisories to avoid local fish, eggs, meat and minimisation of contact with contaminated soils. In 1996, epa authorised the Michigan Department of Environment Quality (deq) to oversee the implementation of Dow's corrective action responsibilities. However, due to constraints within deq, there was only limited follow up done on contamination in the region.

Another study by deq, between December 2000 and June 2001, was mired in controversy. The study found that the dioxin concentration ranged between 33 parts per trillion (ppt) and 7,261 ppt in the 34 samples collected. The results of the study were kept in wraps and came to public notice only when a deq official tipped off a local environmental group about the results. The documents revealed that the dioxin concentration was 25 times higher than the residential direct contact criteria of 90 ppt. They also brought to light the nexus between deq and Dow to downplay the dioxin threat in the region.

The nexus also entailed a "secret deal" between the two to create a dioxin zone with permissible limit of 831 ppt in the region. The deal, however, fell through in the wake of public and political pressure. As an explanation, Robert McMann, deq spokesperson, said that there were divergent views on the dioxin contamination and on the role of Dow in the community and therefore, they (deq) wanted to work with Dow to come up with a plan without being pulled in multiple directions by different stakeholders.

Tracey Easthope, director of environmental health with Ecology Center, Michigan, says the differences are because of the fact that Midland is a Dow town and a lot of people work in the Dow plant. But that does not give either Dow or deq the liberty to not share information on dioxins, she says.
In 2003, Dow submitted a clean-up plan to deq. But that was full of loopholes. deq in turn, sent the plan back to Dow, which submitted a revised plan only in December 2006.In November 2006, before the submission of the revised plan, Ann Arbor Technical Services, an agency hired by Dow, identified several hot spots along a 9.5 km stretch of the Tittabawassee river, and noted that the areas were contaminated with dioxin levels up to 87,000 ppt, far in excess of the state requirement of 90 ppt. The hotspots are areas of concern as they are subject to flooding and erosion, which could further spread contamination.

McMann said that although not much clean-up was done in 2004-05, Dow had put up boardwalk along the river to warn people about the dioxin contamination. But Kathy Miller, a resident, says that they felt they were being held hostage in their own homes because they had to constantly wear masks and not allow their children to come in contact with soil. "Just informing that there are contaminants isn't enough," she said.


usepa on July 7, 2007, reacted to Dow's revised plan saying, "Dow's description of historical plant operations and waste management practices has significant deficiencies. Dow has provided no specific information about the many hazardous constituents released by it into the watershed." epa has also raised other issues such as Dow failing to report on environmental monitoring data to deq, and seeking confidentiality on public documents.

While Dow has agreed to comply with epa orders, both Dow and deq are baffled at epa's "sudden order" and "strict action". Community groups, however, have welcomed epa's move and are hopeful about the clean-up.