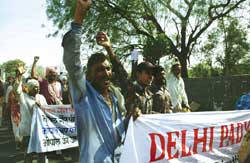 After years of protesting against Dow Chemical Company, Bhopal gas victims have found an unlikely ally -- the shareholders of the company. Dow Chemicals has bought Union Carbide, the company that owned the plant, which caused the leak, which led to the disaster.

Shareholders feel that Dow's reputation and business in India was threatened. Showing respect for human rights would be a good business decision, and Dow should, therefore, undertake new initiatives to address the needs of survivors. They asked the company to produce a report listing the new initiatives taken by the management to address environmental, health and social concerns of the victims.