Down the nuclear trail 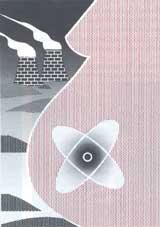 A RECENT study has revealed that after a period of heavy nuclear testing, a large number of babies with Down's syndrome were born in FyIde area of Lancashire in the UK. it also showed that a fire at the nearby Windscale (now Sellafield) nuclear power station in 1957 preceded a surge in cases of the disorder (British Medical Journal, Vol 3 10, No 6987).

Conducted by John Bound, former paciiatrician at the Victoria Hospital, Blackpool; Brian Francis, of the Centre for Applied Statistics, Lancaster; and Peter Harvey, pathologist at the Royal Lancaster infirmary, the study analysed 167 cases of Down's syndrome from among 12,015 total births in the region between 1957 and 1991.

Women were divided into 2 age groups of below and over 35 years. This was done take into the account to greater likelihood of women over 35 giving birth to'a child with Down's syndrome. The incidence of the syndrome was compared with the statistics giving estimates of whole body radiation doses that an average Briton received each year from nuclear test fall- outs. It was found that 2 peaks of fallout, in 1958 and 1962-64, coincided with the peak rates of Down's syndrome cases, particularly in the older age group.

According to Bound, these studies show that low dose radiation is a causative factor in Down', syndrome. "It seems that the total dose you've had in your life is much more important than any individual dose. The greater susceptibility of older women suggests that these low doses may be the straw that broke the camel's back," says Bound.

Nuclear test fallout is not the only source of radiation that humans are exposed to. In fact, of the total exposure to radiation, background radiation from cosmic rays or other ionising materials in the earth accounts for as much as 90 per cent.

Women in FyIde region were exposed to increasing amounts of radiation for the purpose of medical diagnosis or treatment between 1957%01, but this did not have much effect on the incidence rate of the syndrome.

While the blame is largely dumped on Sellaficld, FyIde also has a similar incidence to add to the national average. Bound and colleagues suggest that the major reactor fire at the plant in 1957 could have been responsible for the excess ground deposits of radioactive material during the peak of 1958.

The study noted that there was a non-significant rise in Down's syndrome cases after the Chernobyl incident also, as the Chernobyl cloud passed over FyIde. But, says Bound, that this would have generated only about a quarter as much radiation in the area as the nuclear tests of the '50s and the '60s.

Down's syndrome was first diagnosed in 1866, when natural radiation could be the only source of exposure. Though human exposure has increased by only about 10 per cent since then, the incidence of Down's syndrome has steadily gone up this century.