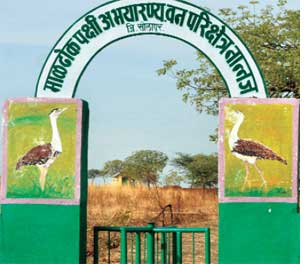 IN A closed-door meeting on February 20, the Maharashtra government and the state wildlife board agreed to reduce the size of Maldhok sanctuary--home to the endangered Great Indian Bustard.

The agreement proposes to reduce the sanctuary, spread over 849,700 hectares in Solapur district to 4 per cent of its present size.

A committee was formed under the state forest minister Babanrao Panchpute to study the denotification proposal. "The committee will visit the sanctuary to ascertain the number of Great Indian Bustards and hold discussions with local people. Based on this, it will submit its report to the Supreme Court for approval of denotification," said S A Thorat, chief conservator of forests, Pune.

The move has pacified a group of farmers and local people who staged protests in November 2008 demanding the size of the sanctuary is reduced.They said the sanctuary does not allow development activities in the area and their livelihoods were at stake. "There are barely 20-25 Great Indian Bustards in the sanctuary," said Shripad Shastri from Valuj village in Solpaur.

Wildlife experts and environmentalists, however, say the bird needs protection. The sanctuary should be preserved in its present size, they added. "The Great Indian Bustard is a resident species of Solapur district and hence its breeding areas need to be protected," said B S Kulkarni who discovered the bird in Solapur in 1978. "At present the bustard is under great pressure from poaching.

Local people often kill the bird and sell its meat. They also sell chicks for as little as Rs 5 a piece and Rs 15-20 for an adult. The forest department has failed to protect the bird, which is on the verge of extinction," said Kulkarni.

Some citizens, too, demand protection and preservation of the sanctuary. "In Maharashtra, it is the only grassland sanctuary spread over such a vast area. But politicians want to grab this land. Builders are also eyeing this land," said Raja Shinde, a birdwatcher.