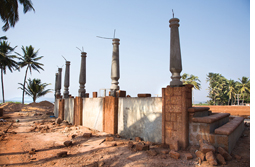 Fisherfolks across India's 7,500 km long coastline are up in arms against the draft Coastal Zone Management Notification. The coastal communities say the notification does not acknowledge their traditional rights and can damage the coasts and the people. The draft, prepared by the Union ministry of environment and forests (moef), will soon be forwarded to the prime minister for his approval.

The 2007 draft will replace the Coastal Regulation Zone (crz) Notification, 1991. On July 19, 2004, moef had constituted a 13-member panel under agriculture scientist M S Swaminathan to review the 1991 notification. The committee submitted its report in February 2005, paving the way for the new draft.

cmz-iii includes open areas including coastal waters--excluding those classified as cmz- i, ii and iv

cmz-iv includes the inland territories of Andaman and Nicobar (a&n), Lakshadweep, and other offshore islands

The draft has given a new definition to 'coastal zone', which, it says, includes "the area from the territorial waters limit--12 nautical miles measured from the appropriate baseline--including its sea bed, the adjacent land area along the coast and inland water bodies influenced by tidal action".

The draft envisages creating what it calls setback lines along the coast. This is a line that will be scientifically calculated based on the vulnerability of the coast to various hazards.

moef says many industrialised countries follow the practice. Though the draft is silent on the technical guidelines for measuring the line, the ministry says they "may be provided" later.

The draft has also recommended constructing a seawall for setback line in crz-ii areas. It also has a provision for creating a 31-member National Board for Sustainable Coastal Zone Management chaired by the Union minister for environment and forests.
"The government is facilitating setting up of industry in the sea. The new definition of coastal zones will only benefit industry which will pollute the coasts, threatening livelihoods of the fisherfolks," says Ossie Fernandes of the Coastal Action Network in Chennai.

"moef has failed to do any regulation in coastal zones and now has proposed to manage the zones. This will affect over 3,202 fishing villages in India. If the government does not withdraw it, the fishing communities will go on agitation and may be forced to take extreme steps," says Harekrishna Debnath, chairperson of the National Fishworkers Forum (nff).

On June 11, 2007, the National Consultation on Impending Threat to the Coastal Zone--a collective of representatives from fishing communities and various ngos--met in Chennai and issued a joint statement.

They demanded "a comprehensive legislation (to protect coastal environment and the livelihoods of coastal communities) on the basis of public consultations, particularly with fishing and other natural-resource dependent communities, with customary rights in the coastal zone; recognition and regularisation of settlements and customary uses of coastal spaces by the marine fishing villages along India's coastline identified by the Marine Fisheries Census, 2005..." Despite the concerns, moef is trying to get the draft notified as soon as possible. The ministry, say media reports, has got approval from the planning commission to seek Rs 500-crore aid from the World Bank on the basis of the notification.


In 1981, the then prime minister Indira Gandhi proposed that no permanent structure should come up within 500 metres of the high-tide line (HTL) along the coast. The discussions that followed were culminated in moef issuing the crz notification on February 19. But the notification was followed by a slew of amendments proposed by various committees, removing much of the original effect (see box Controversial committees). Some of the amendments they proposed allowed

January 31, 1997 Mining of sand and withdrawal of groundwater in the crz area in a&n

August 4, 2000 Storage of liquefied natural gas in the inter-tidal area and extraction of oil and gas in crzs

April 12, 2001 Setting up of projects under the department of atomic energy, pipelines and conveying systems in crz

May 21, 2002 Non-polluting industries and other service industries in crz in special economic zones

July 24, 2003 Relaxing ndz to 50 metres from htl in a&n and Lakshadweep, for promoting tourism


Environmentalists say the 2007 draft has many contradictions with its 1991 counterpart (see table One step in, two steps out). "The old notification clearly mentioned the customary rights of traditional fisherfolks and allowed them to work within the ndz to earn a livelihood. The new draft does not," says Debnath. According to the people, the cmz-i has lost its relevance since it is no longer an ndz.

Organisations like nff and the South Indian Federation of Fishermen Societies have started a nation-wide campaign against the draft, asking the government to withdraw it before August 9.

"The notification will make available premium coastal land to commercial interests," says Sudarshan Rodriguez with the Ashoka Trust for Research in Ecology and the Environment in Chennai.

The notification has not provided any guidelines based on which the integrated coastal zone management plans (iczmp) should be prepared. The appendix v of the draft lists "activities requiring access to shoreline"--ports, fish landing sites, and defence installations. "What if iczmp adopts these activities as allowed in czm-i? Why this vagueness?" asks Rodriguez.

The fishing community feels the setback line may also cause trouble. "In the name of protection, the setback line will push the fishing villages away from the sea. Municipalities will construct seawall and that will legalise all activities taking place on the other side of the wall," Debnath says.

According to Fernandes, moef is highly optimistic in thinking it will map the setback line for the entire Indian coast. "In the last 16 years, most states have failed in even demarcating the HTL under the 1991 notification," he adds.

nff says the reclassification of most crz-iii areas as czm-ii in the new notification poses a serious threat to the fishing communities. For instance, they say, most fishing villages under crz-iii category--as per the 1991 notification--had protection in terms of ndz. If the new draft is legalised, they will be under crz-ii and be open to unplanned development.

"The only protection measure the new notification offers in crz-ii is construction of a sea wall which the local authorities can decide. Once this is made, all other activities can be carried out on the landward side of seawall," says Rodriguez.

Debnath says inspite of the efforts by nff and other concerned bodies, the government is passive to the demands of the fishing communities. No hearing has been held yet, he says, adding, "The Swaminathan committee and moef have refused to listen to us. Now, we are left with no option but to go on a nationwide agitation."