Draft national policy for farmers is a good begining 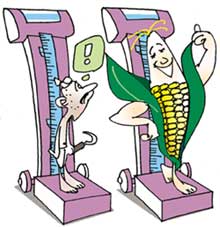 A paradigm shift appears to be occurring in the way policy-makers in India view agriculture: the focus is moving from increasing food grain production to ensuring farmers' welfare. The shift is evident in the draft National Policy for Farmers, prepared by the National Commission on Farmers (ncf) and submitted to the Union agriculture minister on April 13 .

There is concern about farming becoming unprofitable for farmers.

"With almost 40 per cent of Indian farmers ready to quit farming, the situation is simply alarming," says L C Jain, a former member of the Planning Commission. The commission wants the government to make ending "the era of farmers' suicides and to restore pride and confidence in India's agricultural capability" its foremost task. Livelihood security packages, hope generation teams for counselling (to check suicides) and minimum support prices for produce other than food grains have been proposed. The policy hinges on a strong land reforms agenda considering that about 12 per cent of Indian farmers don't own land and almost 60 per cent possess less than a hectare. Incidentally, this is the first policy for farmers in a country where agriculture is the occupation for almost 70 per cent of the population.

The draft, however, is in direct conflict with several laws announced earlier to make agriculture market-friendly, such as the Agricultural Produce Marketing Committee Act that allows private food majors to procure food. This is reducing buffer stock of food grains and will ultimately affect the food supply to the poor, of whom farmers constitute the biggest chunk.

"The government is hell bent on making agriculture open for sale to the industry," says K C Nahata, a farmer activist, referring to the act. The act also promotes contract farming, which seems only to benefit industry. "Contract farming led to savings of nearly 20-30 per cent for the company," says Abhiram Seth, executive director, exports and external affairs, PepsiCo India Holdings. But farmers have been offered the same or less price and sometimes even faced breach of contract (for instance, the poultry farmers in Maharashtra were told their produce could not be procured because of lack of demand in the market). To address the issue, the policy has listed a code of conduct for contract farming.

The spirit of the policy will also be in direct opposition to the draft Seed Bill 2004, which is "another weapon against the farmers as it claims to snatch the farmers' rights over seed", says Kishan Bir Chaudhary, executive chairman, Farmers' Forum. The plethora of free trade agreements and zero-duty import of wheat also harm farmers.

Farming accounts for 21 per cent of the gdp, which is not much considering the 70 crore people it engages. But precisely because their number is so large , farmers' interests cannot be ignored.
Employment India Haryana Punjab Andhra Pradesh News News News Children Heart Diseases Health Personnel
SUPPORT US