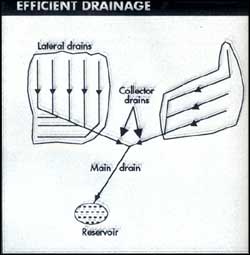 SCIENTISTS at the Central Soil and Salinity Research Institute (CSSRI) in Karnal, Haryana, have developed a subsurface drainage system that effectively reduces soil salinity in waterlogged regions, restores the water table and puts such land back under the plough within three years. CSSRI director N T Singh says the new system is particularly significant because soil salinity is going to increase in the years ahead.

Subsurface drainage is the only effective way of removing excess salts and water, says K V G K Rao, head of an Indo-Dutch project on saline soil reclamation at the CSSRI.

The drainage system was used by CSSRI scientists to reclaim land that farmers had abandoned in Haryana's Rohtak and Sonepat districts because of its high salinity. In test areas in the two districts, soil salinity was brought down in two years from 50 deci-Siemen (unit used to measure soil salinity) per metre (dS/m) to between 4 dS/m and 9 dS/m, a range in which some crops can be grown. As a result, the scientists say, they were able to produce about 2 tonnes of coarse grains or cotton seed per ha as a kharif crop and more than 4 tonnes of wheat or barley and 2 tonnes of mustard as rabi crops.

The scientists say their system consists of an underground network of horizontal channels -- lateral drains, collector drains and main drains. Lateral drains run parallel to each other and cover the entire field. Excess ground water from the soil above, which contains soluble salts, seeps into these drains and from there to the collector drain, which then conveys it to the main drains. From here, the water is conveyed to an outlet for disposal outside the area, either by gravity or by pumping.

Rao found that within three years of installing the new system, the quality of the effluent water improved enough for it to be reused for irrigation. Installing the drainage system costs Rs 18,000 per ha. Rao says, "The overall cost per ha decreases as the area increases." Therefore, it would be cheaper to install the system on a cooperative basis.

Singh points out that saline water from the drains cannot be conveyed into rivers because this would result in river water becoming contaminated, except in the monsoon season, when the rains would help to dilute salinity. Otherwise, he adds, one option is to construct large reservoirs or deep wells into which saline water could be pumped for storage.