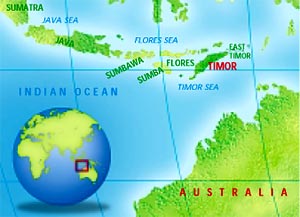 Even as the pint-sized East Timor and Australia embarked on talks to settle the issues of their sea border and the ownership of billions of dollars worth of offshore oil and gas reserves, the former launched yet another broadside against the latter. East Timor's Prime Minister Mari Alkatiri alleged that the country loses a million dollars every day due to Australia's unlawful exploitation of resources in the disputed area. He added that a boundary fixed on the basis of international law could triple the income of a poor country like East Timor.

For its part, Australia would like to maintain the border agreed upon with Jakarta after Indonesia invaded East Timor in 1975, as this would give it the lion's share of oil and gas reserves.