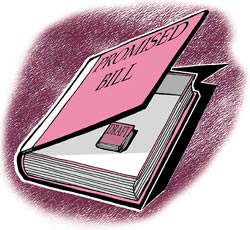 a tentative draft of the National Rural Employment Guarantee Act has been forwarded to the Union government by the National Advisory Council (nac) on the government's national common minimum programme (ncmp). The legislation was an important electoral promise of the Congress, which heads the governing alliance at the centre, and was later included in the ncmp. But experts say the draft bill, to be discussed in Parliament, is a major climb down on the original promise of guaranteeing employment to every poor household in rural and urban areas. nac adopted its draft after conducting hectic discussions on its content for nearly one month.

A month ago, 100 civil society groups had also issued a draft of the act.

In contrast to the ncmp promise to guarantee employment to "one able-bodied person in every rural, urban poor and lower middle-class household", the proposed bill restricts it to "rural" areas. In view of ncmp's promise of 100 days of employment, it guarantees 100 days of casual manual work a year to every household in rural areas on demand. It also has the provision for gradually extending the number of days of employment and easing its restriction to rural areas.

The draft bill of civil society groups guaranteed year-round employment. Some nac members, who support the civil groups' draft, are dissatisfied with nac's draft. "We are not very happy but this is the most we could expect at present," says Aruna Roy of Mazdoor Kisan Shakti Sangthan, Rajasthan, who is also an nac member. Jean Dreze, another member currently leading a right to food campaign, says: "The draft is a compromise and based on consensus. But we make a beginning from here."

The draft bill requires the employment seekers under the scheme to register every five years. They have to submit their applications at least 15 days before the date of employment and would be given continuous work for minimum 15 days. A minimum unemployment allowance, equal to two-third of prevailing statutory wage, would be given if work is not provided within seven days. The draft also has the provision to penalise programme officers of the works undertaken under the scheme in case of lapse in duty. Gender discrimination in wages would be banned and disabled persons can undertake "activities that are compatible with their abilities". The law, once formulated, has to be implemented within two years.

Supporters of the programme say it would cost less than 1.5 to 1.8 per cent of the gdp. Besides, this money will be spent entirely on village infrastructure, which would regenerate the economy in the long run. Eminent economist Jayati Ghosh estimates the cost at Rs 44,000-53,000 crore while civil society groups put it around Rs 32,000 crore.