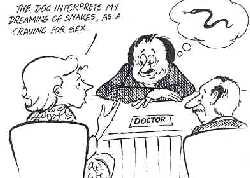 Interpreting dreams to help diagnosis was a major topic of discussion at a two-day convention organised by the Indian Homoeopathic Institute at Vijayawada in December 1993. The participants agreed their experiences indicated dreams could help diagnose various chronic diseases whose symptoms are otherwise not discernible.

C C Desai, a Bombay-based homoeopath, claimed the dreams of a woman who suffered from rheumatoid arthritis helped him cure the patient. Other doctors also cited instances of dreams being interpreted to cure people. Though the experts admitted interpretations could be intuitive, they argued that treatises on homoeopathy have dealt with this in considerable detail and rationalised it to a great extent.

However, many doctors called for further scientific research to systematise interpretations. One of them pointed out that dreams of snakes are commonly interpreted by homoeopaths in India as a craving for sex, in Israel as a symptom of abdominal disorders and in Egypt as an indication of liver problems. The participants recommended an in-depth study of ongoing work on the interpretation of nocturnal sightings.