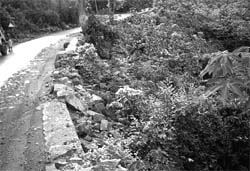 massive ecological destruction is leading to the drying up of riverbeds, nullahs and streams in and around Similipal. This was a common fear expressed by speakers at a recent workshop on 'River and dam management in the context of Similipal protection' organised recently.

It is estimated that there are about 1,200 watershed points all over the zone, with 400 inside Similipal sanctuary. The ecological destruction has already resulted in the drying up of the Dudhijharan - a water-stream inside Similipal. If immediate steps are not taken to halt the flow of pollutants into the perennial streams, the region would be deprived of water. Interestingly, Similipal is situated on the same axis of the Sahara desert of Africa.

Some speakers claimed that some plants peculiar to desert areas were recently identified in the Similipal plateau.

Other speakers aired their grievance that brokers were misappropriating the benefits of joint forest management ( jfm ) depriving the real beneficiaries - the field level workers - of any pecuniary benefits. They have decided to adopt "Protection to Similipal" as their slogan.

None of the forest and Similipal Tiger Reserve officials attended the meet despite being invited.