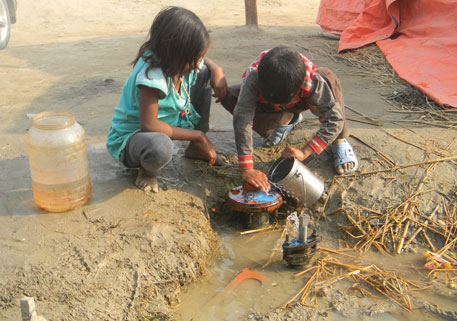 Thousands of pilgrims staying right on the river side are reeling from acute drinking water scarcity during the Maha Kumbh. Kalpvasis, who stay in temporary shelters on the riverside and spend their time mediatating and performing rituals, are being forced to drink non-purified water.

A sanitation worker, pouring water on the makeshift road, informed that what was being supplied was “borewell water”. The water is stored in one of the many water tanks parked on the bund road, just off the mela area. Pilgrims complained that most of the taps installed in their akharas or tent areas are not working. At times, they are forced to walk about three km to fetch drinking water.

Uttar Pradesh Jal Nigam officials admitted that the water being provided to the pilgrims is from deep bore wells and that the water is not filtered properly. Many akharas have installed reverse osmosis filters inside their camps and shopkeepers can be seen using common water purifiers. The worst hit people among the pilgrims are the Kalpvasis who have no affiliation to any rich religious trust.

In several pockets, drinking water pipelines are yet to be laid; in others where pipelines exist, the water utility staff can be seen working along with sanitation workers scooping silt out of pipeline joints. The leakages in such pipelines lead to large amounts of water being wasted. 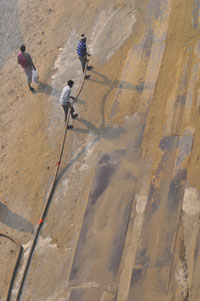 Doctors at the central hospital informed that they are receiving a large number of patients with stomach ailments. In one of the 14 sectors, in which Kumbh Mela area is divided, about 50 cases of diarrheoa were reported in a week. When people are forced to drink dirty water, makeshift hotels and eateries which cater to the floating population of about one million each day are unlikely to take precautions when it comes to water used for cooking. The problem is most severe in sectors 6, 7, 8 and 9 in Kumbh area. The commissioner held a meeting with the officials of Jal Nigam on Tuesday and is learnt to have lambasted them for poor arrangements.

The city authorities have made a provision of 80 million litres a day (MLD) of water for Kumbh. This quantity works out to be less than 2 litres per person per day after accounting leakage losses. As per norms, a person needs at least 135 litres a day for sustenance. For Kumbh City, there is no water access as prescribed by WHO standard. With 20.000 tap connections, there is only one tap per 2,000 people in the Kumbh city, a far cry from 1 tap per 75 people in Dharavi slums in Mumbai.

This year, an estimated 10 crore people are expected to take part in Kumbh festival. The administration had claimed to have pulled up its socks to meet any crisis and set an exemplary example of crowd management. This Kumbh there are 30,000 policemen, at least 30 police stations, each with its own fire station. Nearly 800 km of electric wires and at least 48 power sub-stations.

However, just a day after the first Shahi Snan of Makar Sankranti, tall claims of the state government has gone bust.
The mela authorities said that the sewage water collected from various toilets is being collected in tanks and then treated with microbes before letting the water out into the river.