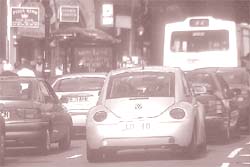 the profit-driven polluting automobile industry, that fought the us Environmental Protection Agency's ( usepa ) efforts to implement strict air quality standards, got a snub recently when a re-evaluation of the studies -- based on which the usepa had proclaimed new air quality standards, by a research organisation -- showed that the usepa was strong on its scientific ground.

Epidemiological work conducted over several decades has suggested long-term residence in cities with elevated ambient levels of air pollution from combustion sources is associated with increased mortality. To deal with this problem, the usepa in 1997 decided not only to tighten the existing air quality standards, but also extended the regulations from respirable particulate matter (pm10) to fine particulate matter (PM2.5). The new regulations were based on two studies on the health effects of particulate pollution conducted by researchers at the us -based Harvard University and the American Cancer Society ( acs ).

In the first study, better known as the Harvard Six Cities Study, more than 8,000 people were studied for 14 to 16 years beginning in the mid-1970s. The researchers found that mortality increased by 26 per cent in the most polluted city when compared to the least polluted city due to fine particles and sulphate particles.

In the much larger acs study -- conducted over the years from 1982 to 1989 -- 552,138 people were studied across 154 cities. Again higher ambient levels of fine and sulphate particles were found to be associated with increased mortality.

After usepa proposed the standard in 1996, the American Petroleum Institute ( api ) and some other industry groups blasted the two studies. Some scientists also argued in congressional hearings that the apparent link might result from other air pollutants, a less healthy lifestyle in dirtier cities, or other confounding factors. Industry groups sued to block the new regulations. A federal court decided that the science was sound but threw out the rules based on legal arguments. The case is now scheduled to be taken up by the us Supreme Court.

When some insisted that the data on the basis of which the conclusions were made be made public, the researchers found that this would breach the assurances on confidentiality given to the individuals who had participated in the research. Therefore, to address the public controversy, Harvard University and the acs requested the hei to organise an independent analysis of the data from these studies. Both the institutions agreed to provide access to their data to a team of analysts selected by hei through a competitive process.

The team led by statistician Daniel Krewski of the University of Ottowa, replicated the studies from original data sets and got essentially the same results: slightly higher death rates in the dirtier cities. The team probed the data for more than 30 possible confounders, from altitude to health services, and tested the link "in nearly every possible manner" with various analytical techniques. The results still held. This finding has bolstered the findings of another hei study which looked at daily pm levels and deaths in 90 cities published just prior to the present one.