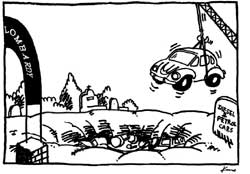 A SMOG emergency caused by two months without rain could prove a blessing in disguise for Italy's Lombardy region. Hope has sprung from the haze with plans afoot to ban the sale of new petrol and diesel-powered cars in the area. The measure is a part of a roadmap outlined by the local authorities to provide clean air. A three-year deadline has been set and automakers have been exhorted to provide alternative "green" vehicles within this time-frame.

The region's president, Roberto Formigoni, is the architect of the campaign - the first of its kind in Europe. Formigoni is a member of Italian prime minister Silvio Berlusconi's Forza Italia party and aims to tackle the emergency by improving the environmental performance of private vehicles, and replacing traditional oil-based fuels with electricity, gas and hydrogen.

The nine million inhabitants of Lombardy - one of the Europe's industrial hubs - create a major part of the country's national wealth, but wreak havoc on the environment with their manufacturing units and the movement of about four million cars on the roads. Air pollution is said to have led to chronic respiratory problems and lung cancer. In all, about 180 people die every year in the area due to pollution-related illnesses.

Fiat, BMW and Citroen have been quick to respond to Formigoni's appeal, with officials from the three companies set to present proposals to technical experts. Transport experts have welcomed the move, but they point out that much remains to be done to reduce the cost of clean air vehicles.

The local authorities also intend to attack the pollution problem on other fronts, urging residents to adopt the car pool system and use public transport. They intend to diversify work timetables for offices, factories, schools and shops as well - to reduce the load on the transport network during rush hour.