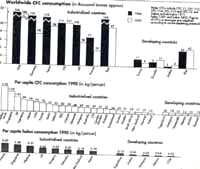 Amongst the developing countries, Brazil, Chile, the Philippines, Venezuela and Yugoslavia have reported a drop in CFC consumption. Because their total consumption of ozone-depleting substances has turned out to be more than 0.3 kg per capita -- the threshold stated in the Montreal Protocol -- Bahrain, Malta, Singapore and the Untied Arab Emirates have been clubbed with industrialised countries instead of developing countries. A decision is still awaited about South Korea.