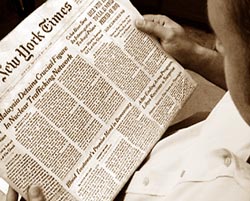 At an international conference on nuclear energy, why were journalists answering questions put by scientists? To ensure objective reporting, say nuclear power supporters, who complain that the media is fixated on nuclear weapons.

"Nuclear often means fear and war," says Yearn Hong Choi, a urban sciences professor in the University of Seoul, South Korea, who has researched 'media reporting of nuclear issues during 1990-2002 in South Korea and the us'.

The research paper, presented at the June 2004 conference on 50 years of nuclear power in Moscow, says that newspapers in both countries give importance to nuclear weapons though South Korea doesn't have such arms and the us has the largest arsenal.

Four leading us newspapers devoted 68.1 per cent of their reporting on nuclear issues to weapons and 5 per cent on technology, though the country gets 10 per cent electricity from reactors.

However, the study published by the Institute of Korean Studies, Seoul, didn't find any media bias against nuclear power in both countries. Instead, us and South Korean newspapers are usually neutral and sometimes support their nuclear programmes.

When South Korean newspapers criticise, the editorials speak against the way in which the government plans new reactors or searches for nuclear waste disposal sites. us newspapers defended their coverage on nuclear issues by saying that "...nuclear power plant safety has been proven. So there is no issue." That should convince the nuclear establishment. The media is on their side.