When rains fail, people dependent on forests can relish the strong-flavoured sarata bhaji and enjoy the added bonus of health benefits 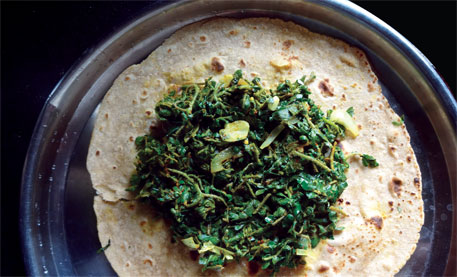 For humans, a good or bad monsoon may constitute the difference between abundant crops and starvation, but in nature yearly rainfall differences are a way to balance out the space-sharing arrangements between different types of vegetation. The deficient rainfall this year saw forest-dependent populations miss out on many of their favourite monsoon delicacies, like mushroom. But there are compensations.

Some vegetations which disappear from view once the rains come in earnest, stayed on for longer periods this year, allowing people to enjoy them for a change.

One such vegetable is sarata bhaji (Tribulus terrestris), which grows mostly on low-lying, rocky land in drought-prone areas across Asia, America and Europe. It is nature’s way of ensuring food security as the dark green creeper grows in abundance at a time when other crops are scarce.

But in years of a good monsoon, its days are limited to early June when the showers are light and other vegetation is yet to show up. This year, in the drought-prone Yavatmal district of Maharashtra, sarata bhaji was available in ample amounts even as late as August.

“Last year the rains came so soon we could not even get a taste of this vegetable,” says Madhukar Dhas, who heads the Yavatmal-based non-profit Dilasa. His organisation works on drought-proofing, but he has also documented some 70 species of wild vegetables consumed by the rural population of Yavatmal district and worked to revive the forgotten food culture around them.

During a visit to Dhangarwadi village with Dhas and his staff to look into water-harvesting endeavours, I came across a cluster of sarata bhaji growing on a farm. We forgot all work for a full 40 minutes as we squatted on the ground and intently plucked the tender shoots. “Pahile potoba, mag vithoba, (stomach first, god later)” is Dhas’ adage. Born to farm labourers in Marathwada, he was virtually brought up on wild vegetables, and his love for them has continued.

Back at Dilasa’s field office in Choramba village, Dhas gets busy cooking. “This vegetable should not be cooked too long, or it loses all flavour,” he says as he expertly chops the young shoots and stir fries them. In barely 10 minutes, the bhaji is ready. Crisp and chewy, sarata bhaji tastes delicious with bajra bhakhar (thick chapatti made of pearl millet), kadhi and onion. That was the first time I had the bhaji and I quite liked it for its strong flavour.

Dhas’ elderly mother, Shantabai, who stays at the centre, says that in the arid Solapur district where she has lived most of her life, sarata bhaji is a regular part of meals for two to three months. “It is known to be good for debility, diabetes and chamkivaat (sudden, sharp stabs of rheumatic pain),” she adds. 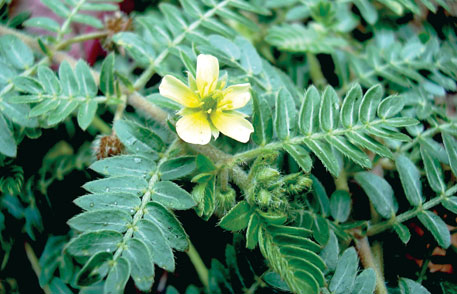 Ayurveda agrees. But there is more to sarata bhaji. According to the well-known text Bhavaprakash Nighantu, gokshur, as the vegetable is known in Sanskrit, removes excess sugar from blood through urine and is excellent for diabetes. It is also good for those suffering from body ache, including joint pain and rheumatism. In addition, says the text, sarata bhaji helps prevent kidney stones and heart problems and removes chest congestion.

Chinese medicine recommends this vegetable to treat impotency and improve mood and stamina. Modern research attributes high nutritive power to this herb. An analysis by Wardha-based non-profit Dhara Mitra in 2008-09 found that sarata bhaji contains high amounts of calcium and phosphorous, which account for its pain- and debility- mitigating properties.

One of its most important functions, perhaps, is to stimulate testosterone, the male sex hormone. Its active ingredient, protodioscin, is a natural precursor of testosterone. The herb can also boost the production of the luteinising hormone, which is a testosterone stimulator.

K Gauthaman of the Department of Obstetrics and Gynaecology, University Hospital, National University of Singapore, has extensively studied this quality of the herb. He found that sexual behaviour in rats improved after being administered the extract of this herb, showing that the plant has aphrodisiac qualities.

It is this attribute, perhaps, that accounts for the popularity of Tribulussupplements among sportspersons. The Western world, where it is popularly known as “puncture vine” because of the impact of its thorny fruit on bicycle tires, became aware of this herb in the early 1990s after word got out that Eastern European countries were giving supplements prepared from this herb to athletes to enhance their performance in the Olympics and improve their medal tally. Following this, sportspersons from around the world pounced on it. In later years, research found the herb to also have a hormone regulatory effect. Studies have further linked it to a boost in blood circulation and energy levels. Today, Tribulus supplements are popular among body-builders and other athletes who wish to restore their hormone levels to normal after taking testosterone boosters.

Not with standing the commercialisation of the herb, it is still best consumed fresh, says Shantabai. Active and fit at the age of 78, she stands upright and says with a proud smile, “All my life I have mostly eaten bajra and jowar (sorghum) bhakhar and fresh wild vegetables, and look at me now; I am good to run a household for another 20 years.”