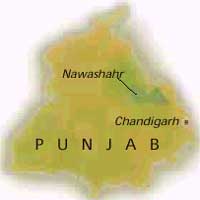 there are no water wars at the tubewells of Toansa village. In fact, they wear a deserted look -- the bustle that usually surrounds the main water sources of a village is conspicuously absent. And no, if you think that's because there is an abundance of water, you've got it wrong. It's because industrial pollutants have made the water unfit for consumption over the past 20 years.

The primary suspects are three drug units owned by Ranbaxy Laboratories Ltd, DSM Anti-Infective India Pvt Ltd (based in the Netherlands) and Montari Industries (which packed up in 2001).

Things took a long time to come to a head, however. On November 30, residents of 11 villages of Balachaur tehsil in Nawashahr district got a shock -- the Nawashahr Water Supply and Sanitation Department (wssd) served a notice asking them not to draw water from any of the 200 hand pumps supplying drinking water and proceeded to mark them with red crosses. The department asked the villagers to use the piped water supplied to them. For the villagers of Toansa, one of the worst-affected villages, the notice came as no surprise. "I have been complaining about the groundwater since 1999 and got myself a water connection last year because I knew the water was contaminated. Frustrated, I stopped complaining two years ago," says Hardyal Singh of Toansa.

For the villagers of Toansa, which is surrounded by industries on all sides, it has been a long and discouraging fight. As far back as 2002, a survey by the Punjab Pollution Control Board (ppcb) had found the groundwater within a two-kilometre radius of the Toansa industrial belt to be highly polluted -- with high fluoride and chloride content and high biological oxygen demand and chemical oxygen demand -- in other words, utterly unfit for human consumption. ppcb had then ordered both the companies to change or upgrade their systems of effluent treatment. At that time, the manufacturers were using solar evaporation ponds lined with a thin plastic sheet placed below bricks to concentrate inorganic effluents. This system works on the principle that water-based effluents would evaporate naturally. However, according to ppcb, damaged plastic sheets can result in percolation of contaminated water into the ground. In a bid to control further damage, ppcb had directed the manufacturers to treat their effluents and re-line their ponds.

Though the critical situation was established in 2002, it was only last year that the villagers were advised not to use the water. And it wasn't just the ppcb that had realised the gravity of the situation. wssd had also sent water samples from 31 hand pumps to the Trade Waste and Effluents Research Unit, Public Health Branch, Patiala, for a basic profile. The preliminary report had said the samples were below drinking quality. "We have known for a long time that the groundwater in the whole tehsil was contaminated. The department also informed the chief engineer of the department as well as the principal secretary of environment," says Brij Mohan, joint engineer with wssd, Balachaur.

At the same time, in June 2003, ppcb asked Tetra Tech India, an environmental consulting group, to carry out studies of groundwater contamination in consultation with the board. Although Romila Dubey, prinicipal secretary, science, technology and environment, pointedly refused to part with the Tetra report, ppcb said it had found solvents in the groundwater surrounding three factories of Ranbaxy, dsm and Montari Industries. ppcb says the solvent profile in the samples pins the source down as these factories.

With so many manufacturing units within a stone's throw of each other, it is easy to pass the buck. Shiv Bahl, general manager, liaison and administration, Ranbaxy, says, "To be honest, there is no doubt that the groundwater is severely polluted in the vicinity. But it is not because of us. As we are downstream from both dsm and Montari, the groundwater flow is through Ranbaxy premises. It is very difficult to say who is polluting how much." On the other hand, Anil Grover, site manager, DSM, says that in case of any contamination, the common perception is that the evaporation ponds are to blame.

ppcb had ordered the two companies to re-line their ponds almost two years back. While Ranbaxy has already lined its pits, dsm is in the process of re-lining theirs. When the order came, dsm had seven ponds; they have phased out three and re-lined two.


Both the pharmaceutical factories have been in operation in Toansa for the past 20 years. Ranbaxy produces active pharmaceutical ingredients such as antibiotics, cephalosporins and 38 kinds of non-antibiotics, whereas dsm only produces amoxycillin, ampicillin and cloxacillin. The production of bulk drugs requires a large amount of solvents such as methanol, isopropyl alcohol and methylene chloride. To make production feasible, the factories need to have a solvent recovery plant to re-cycle the solvents. However, the recovery is never full and the waste effluent carries out some of the solvents.

It was only after the complaints from the villagers and the ppcb order that the two companies started upgrading their effluent treatment plants. Ranbaxy installed reverse osmosis, ultra-filtration and nano-filtration systems to treat their wastewater at a cost of Rs 12 crore and re-use the treated water for their cooling towers and horticulture gardens, making their plant a zero-discharge plant. Ranbaxy also monitors fish survival in the treated water for 72 hours, according to ppcb standards, which dsm does not.

Also, dsm only has a biological effluent treatment plant (etp) and discharges the cleaned water into 1.8 hectares of forestland behind its plant. The question is: can an etp treat pharmaceutical factory effluents effectively? "Just an etp is not effective enough to treat what comes out of a drug factory. The reason is that they do not produce just one product. They keep changing their product mix and the microbial combination that degrades the solvents does not have time to adjust to the changing solvents," says Suman Govil, director, department of biotechnology, Union ministry of science and technology.

Not just that, it is also difficult to monitor the amount and constituents of the wastewater released when individual factories have their own etp s. "With individual etps, the industry can always claim that it is zero-discharge. It is critical to have a common etp set up by the pollution control board to monitor all pollutant levels. Effluent treatment should never be left at the micro level," says a senior official from the National Environmental Engineering Research Institute (neeri), Nagpur. "Also, this business of recycling to the cooling towers is severely polluting and defeats the purpose of treating solvents. The solvents present in the treated water evaporate out into the atmosphere under the high temperature in the cooling tower by a process called stripping." According to a study done by neeri on drug factories near Hyderabad, there were high levels of atmospheric benzene due to recycling via cooling towers. There are no emission norms on benzene levels in India, said the source.

Moreover, the solvents used by the two plants in their etps cannot degrade methylene chloride. "Just an etp is not effective at all if you consider the kind of solvents they use and land application of treated water has to be discouraged at all costs," says the neeri official.


In 1999, neck deep in debt and a failed crop of poplar trees, Singh sent a soil sample from his field to the Soil Testing Laboratory, Punjab Agricultural University, Ludhiana. They sent back a report advising him that he should not use the water from his 20 metres deep bore-well for irrigation; instead he should mix that water with water from the Sutlej canal. Singh can't do that because canal water is not for Toansa.

"I had planted 1,200 poplars but they all dried up and died in four years. I had planned on selling the wood to plywood factories and start a small shop with the money. I lost it all," Singh says. He also had to pay Rs 3,000 for a piped water connection and has to pay Rs 700 a year for the supply. Singh's neighbour, Parshu Ram, cannot afford a connection. He has to trudge long distances every day to get drinkable water for his children while he and his wife continue to drink water from a hand pump. Thirty per cent of the villagers do not have water connections and every household had to sign the notice saying they knew about the report and the contamination and would use water from the hand pumps at their own risk.

"Frankly, I don't care about the report," says Ron De Vries, manufacturing director, dsm. "People always keep shouting that industries pollute and we are always on the defensive. For me, the past is not relevant. Only the future is."

But for Singh and others, the past is as relevant as the future, in which he has no reason to have much faith.