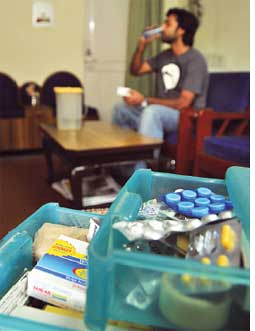 chemical engineers at the Massachusetts Institute of Technology may have the answer to a problem drug companies have been trying to solve--develop antibody-based drugs that have longer shelf life. Antibodies are now used to treat cancer, hiv, arthritis and other diseases. But storing them is a problem as the antibodies tend to clump or aggregate. The scientists identified the patches on the antibodies that attract other antibodies and modified them to prevent aggregation.

Antibodies are proteins produced in the body in response to proteins on the surface of bacteria and viruses and defend the body against them. Naresh Chennamsetty and other researchers used computer simulations to create a model of the antibody. They then developed a parameter, spatial aggregation propensity (sap) of proteins, to determine if a certain patch on the protein is hydrophobic--the hydrophobic patches in the protein repel water and tend to curl when put in water. The researchers gave separate sap values for various parts of the protein surface.

Most of the surface was found to be hydrophilic (water friendly). But some were hydrophobic that made them cling to hydrophobic patches of other antibodies. The researchers modified the exposed hydrophobic parts and made them more hydrophilic by changing the amino acids. This increased the stability of the protein. The sap tool can be used for any protein, not just antibodies, the researchers said indicating it could have wider applications in treating other diseases.

Since 2001, the market for antibody-based therapeutics has been growing yearly at the rate of 35 per cent, the highest rate among all biotech drugs.