Gujarat violence takes its toll on the environment 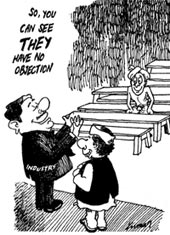 the violence-ridden politics of Gujarat has taken its toll on the environment as well. In March this year, public hearings -- a key component of the environmental impact assessment process -- were made to coincide with communal disturbances in the state. Not surprisingly, the voice of the people got drowned in the din of violence. More recently, dissent was stifled at such a gathering by using force.

In both the instances, the Gujarat Pollution Control Board (gpcb)-- which oversees the interactive sessions under the Environment (Protection) Act, 1986-- has come under a cloud. While eyebrows are being raised over the unprecedented haste shown by the board in the earlier incident, it is alleged to have played the role of a silent spectator in the ensuing slugfest.
During the last week of March, when the death toll in the Gujarat mayhem was rising sharply and parts of Ahmedabad were placed under curfew, the gpcb was busy holding environmental public hearings for 23 new industrial units in the district. Astoundingly, a single cluster environmental impact assessment (eia) was carried out for 19 out of the 23 cases.

The gpcb published a notice on February 22, scheduling this hearing for March 27 at the Ahmedabad district collector's office. Later, an announcement was made for two more hearings (in respect of two industries each) to be held on March 28 -- for all practical purposes, 23 public hearings in one district in a short span of 48 hours.

Mahesh Pandya of the Centre for Social Justice (csj), an Ahmedabad-based non-governmental organisation (ngo), says: "The administration was forced to rush through the process in view of the gpcb's March 30 deadline, directing erring industries to either conduct hearings or shut up shop." Pandya, however, adds: "It was inexplicable why the widespread violence, which engulfed the state from February 28 onwards, was not taken into consideration."

The csj protested against the hearings on three counts. One, that there should be a separate session for each case. Two, as per the regulations the public hearings should be held in the village or block where the industry will be sited. And three, in the prevailing circumstances the public hearings would be a travesty of rules. This was especially so since the district collector's residence (where the hearings were to be conducted) was in the eye of the storm.

But the board stuck to its guns and washed its hands of the location issue. gpcb chairperson K V Bhanujan said this aspect "is being looked after by the collectorate". Pandya reveals, "In the face of an unrelenting bureaucracy, we appealed to the Gujarat High Court (hc) for relief on March 24." Under fire, the administration decided to shift the hearing for the 19 industries, on a mere 24-hour public notice, to the Vatva industrial area of Ahmedabad. This move came just a day before it was to defend its stance in the court.
The hc ruled that the government could proceed with the hearings but that "it will be open to the committee convening public hearing to consider...postponement of the hearing in view of prevailing situation".... It also asked for the minutes of the meeting before they were submitted to the gpcb.

Pandya gives his account of the event: "Some colleagues and I went to attend the hearing at Vatva, but only after having sought police protection. Not surprisingly, there were only 150-odd people of which six were residents of the affected areas." He feels that "the general atmosphere of fear, coupled with such a short notice period, kept many people away". As a result, 14 of the 19 hearings were conducted in a record three hours.

Additional advocate general Kamal Trivedi justified the gpcb's move in court, contending that a common hearing had been scheduled for the 19 industries as all of them discharged their effluents into the same treatment plant and would continue to do so in the future. Local residents were, however, unconvinced. Jaswant Rathod of Vinjhol village, who was present at the meeting, reportedly said: "This eia is bogus; these industrial units are killing my agricultural fields."

At the next hc hearing, representations were made on behalf of other bodies, such as the Ahmedabad-based Kamdar Swasthya Sureksha Mandal. They claimed that they were unable to attend the meeting even though they wished to. The court held that "it cannot be said that authorities have no discretion for not sending the report...within the stipulated time limit". In other words, it accepted the plea of the affected people that a number of them could not participate in the hearing. The court ordered the committee to delay the filing of the report and allow people to make written representations.

While csj has submitted its objections and remarks to the committee, Pandya laments, "The law may have been upheld in letter but the spirit has been vitiated by the manner in which the administration and the gpcb have gone about the entire matter." csj is now demanding that the public hearings be held again, this time with some sincerity.

Even as this controversy is yet to blow over, a fresh row has erupted over another public hearing where ugly scenes were witnessed as industry representatives tried to throw their weight around.


On August 7, members of Paryavaran Suraksha Samiti (pss), an ngo, were allegedly manhandled in a public hearing in Valsad district of the state. They were protesting against the rapid environmental impact assessment of an expansion plan of Atul Limited -- a leading manufacturer of over 500 products such as agrochemicals and dyes. Officials of the district administration and gpcb are said to have winked at the incident. But district authorities claim that the police were called immediately.

Michael Mazgaonkar of pss was one of those attacked. Eyewitnesses said employees of the company roughed up Mazgaonkar, who was translating queries raised by chemical expert K N Ponnani in the local language. Representatives of Indian People's Tribunal and Indian Centre for Human Rights and Law, both Mumbai-based ngos, also allege being brutalised. "The public hearing of Atul Limited was a mere formality," says Sunita Dubey of Environmental Justice Initiative, a Delhi-based ngo. She is joined by other ngos in asking for the eia to be rejected and an enquiry made into the incident.

But the state government feels that the issue is being blown out of proportion. "It was a minor altercation which is a usual occurrence during public hearings. Some ngo representatives were attacked when they raised out-of-context questions, but the district collector intervened and controlled the situation," says Mohammed Shaheed, district development officer, Valsad, one of the panellists at the hearing.

It was only after the vice-president of the company publicly apologised for the behaviour of his employees that the hearing progressed further. The gpcb, on its part, says that the issue was "well taken care of".


Some critics claim that the eia of the company is full of flaws. "The assessment does not mention the source of water to be used by the factory. Even the figures for water consumption vary," alleges Pandya. "In one section, the eia reports that the fish catch in Par river (where Atul dumps its effluent) has increased. But it goes on to contradict itself subsequently, stating that in Umarsadi village the catch has actually decreased by 29 per cent within a period of three years," points out Mazgaonkar.

There are many other misreported facts in the report, claims Mazgaonkar. But company officials maintain that they have one of the most updated eias. gpcb officials will, meanwhile, assess the matter after they get the minutes of the meeting from the district collector.

Till such time that the issue is resolved, it will be seen as yet another blot on the Gujarat administration's image.