Dumping garbage in rivers is now a crime in Maharashtra 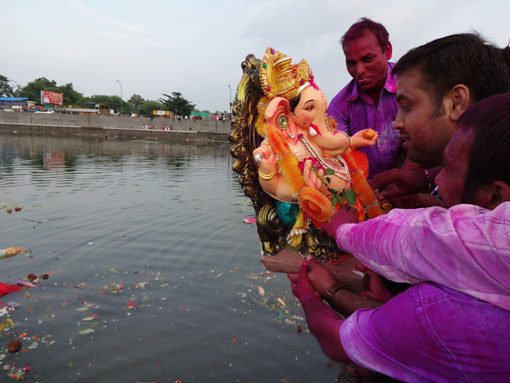 The order also makes a reference to the practice of immersing idols in rivers and has ordered that idols should only be immersed in artificial tanks.

The order calls on municipalities to install containers for dumping nirmalya near river banks during festivals. It also says that municipalities should appoint police squads to guard river banks. The squad should take action against anyone found dumping garbage into the river under the Bombay Police Act. The bench has asked the state government to issue any guidelines required in this regard.

The order came in a case regarding cleaning-up of the Chandrabhaga river in Pandharpur in Maharashtra. But since the problem is state-wide, the court extended the order to the entire state, says Asim Sarode, who represented the petitioning organisation, Manavi Vishta Vahatuk Virodhi Sanghatana. The organisation opposes manual scavenging.

Speaking to Down To Earth, Sarode said that while the order regarding nirmalya and garbage is quite relevant, it is not likely to be effective in cases of idol immersion since the mention of idol immersion was just a passing reference. “A more exhaustive court order will be required to ban idol immersion,” he said.

Order of the National Green Tribunal regarding immersion of idols and Tazias in the waterbodies, 01/07/2014

Order of the Allahabad High Court on immersion of idols in the river Ganga & Yamuna, 12/10/2013

Order of the Allahabad High Court on immersion of idols in the river Ganga & Yamuna, 11/10/2013