"HEALTH for all by the year 2000" was the proclaimed objective of the Primary Health Care Conference held at Alma-Ata in 1978 under the aegis of the World Health Organisation (WHO). The progress of this global programme is monitored by a process of periodic evaluations. The first evaluation exercise was held in 1985 on the basis of data provided by WHO's member states -- 151 member states provided national reports for the subsequent evaluation covering the period 1985-90, using indicators such as availability of primary health care services, infant mortality rates, life expectancy at birth and the health situation. A recent review of this process makes the following observations: 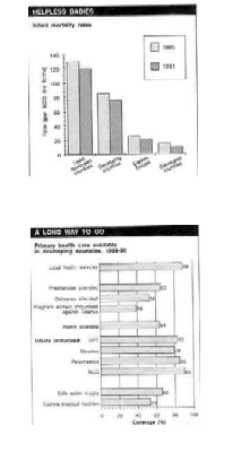 *The state of health around the world shows a broad improvement, but the gap between the least developed countries (LDCs) and the rest of the developing world has actually widened.

*More people can expect to live longer. In 1990, 91 countries with a combined population of 3,600 million had a life expectancy at birth of more than 60 years. A decade ago, only 74 countries with 2,700 million people could be included in this category.

*Tropical diseases are more of a scourge now, cholera having spread to the Americas for the first time in this century. Malaria, yellow fever and dengue epidemics are more prevalent, as are diseases like leishmaniasis (kala-azar), non-venereal endemic syphilis and schistosomiasis (chronic disorders in the liver, intestines, and urinary bladder).

*AIDS is a global phenomenon, as are genital herpes and sexually transmitted chlamydial disease.

*Pulmonary tuberculosis is also on the increase, partly as a result of HIV co-infection. Pneumonia and hepatitis B continue to pose serious threats to human lives.

*Chronic non-communicable diseases are becoming more widespread, especially in the developing world, where the number of cancer cases is higher than in the developed countries.

*There are more diabetics than ever before, and blindness, especially that caused by cataract, has become more common. While developing countries face a greater onslaught of alcohol-related diseases, mental health problems and suicides are more of a menace in the developed countries.

*Dangers related to pregnancy and childbirth continue to be among the leading causes of mortality among women of childbearing age. Globally, the maternal mortality rate was 370 per 10,000 live births in 1990. However, it was 13 times higher in developing countries than in the developed ones, and almost twice as high in the LDCs as compared to the developing countries.