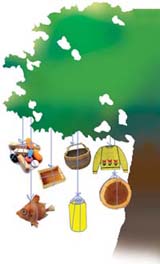 >> Biodiversity hotspots are regions of significant diversity threatened with destruction through commercial exploitation. There are 34 hotspots in the world, accounting for just 1.4 per cent of the world's land. These regions support 60 per cent of species on earth. A hotspot contains at least 1,500 species of endemic vascular plants

>> The global market value of pharmaceuticals derived from genetic resources is between us $75 billion and us $150 billion annually. Annual world wood exports are worth us $97 billion with 3.4 million cubic metre of wood being extracted annually. But few of the resource-rich countries get this money

>> Global fish imports are worth us $35 billion annually. 44 per cent of the world's fish stocks are intensively exploited and 16 per cent is overfished

>> Just 14 mammal and bird species account for 90 per cent of the meat humans eat. 75 per cent of medicines come from herbal, animal or microbiotic origin 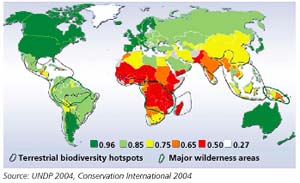 Clearly, the countries blessed with biodiverse regions are not benefiting from them. For instance, the us has about 110,000 sq km of biodiverse area but a gdp of us $13 trillion. Africa has 515,000 sq km of biodiverse area yet only a combined gdp of us $1,806.2 billion. Madagascar and Indian Ocean islands are known for biodiversity--with 600,451 sq km. But Madagascar has a gdp of just us $5,033 million. The lesson: the North is exploiting resources of the South