Dying due to diesel 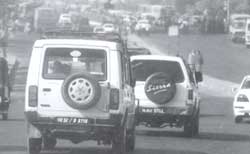 THE axe may soon fall on the manufacturers of diesel vehicles in India. To curb the growing use of diesel in Delhi, the Environment Pollution (prevention) Control Authority (EPA) for the National Capital Territory of Delhi (NCT) may ban the registration of non-commercial vehicles in the NCT. This decision was taken in view of the available information on the toxic effects of diesel fumes on human health.

However, the Association of Indian Automobile Manufacturers (AIAM) has not taken too kindly to this move as the proposed ban will hurt their business interests. "The industry is keen to portray diesel as a green fuel and build public opinion against the ban to protect their business. In the race to introduce diesel models, the industry has chosen to ignore the health effects of toxic diesel emissions," says Anumita Roychowdhury of the Centre for Science and Environment (CSE).

Delhi uses far more diesel than petrol - a ratio that is unlikely to be found in any city outside India. Diesel comprises more than two-thirds of the petroleum-based fuels used in Delhi.Though the quality of diesel used in Delhi is much better than any city in India (0.25 per cent sulphur content), when compared to the best diesel available in the world - which includes Swedish diesel (0.001 per cent sulphur) - the sulphur content is 250 times higher.

Experts say diesel fumes are more dangerous than what was previously thought. Sulphur in diesel is directly correlated with particulate emissions. Diesel particulate matter has been found to be carcinogenic by the Air Resources Board of California, the World Health Organisation and the ministry of occupational health in Germany. Levels of particulate matter are extremely high in Delhi. Recent studies show that diesel engines emit almost 100 times more toxic particulate matter than petrol engines.

The car market will be soon flooded with cars that run on diesel. Cheap diesel prices and extremely lax emission standards for diesel cars make diesel models very attractive. This pricing policy so far has only provided a fiscal incentive to the car industry. Not to be left behind in the race, major vehicle manufacturers are now coming up with their respective diesel models. TELCO, which has ventured into the personal car category for the first time, has already introduced the 1400cc diesel Indica Mint. Threatened by TELCO's entry of diesel Indica Mint in the small car segment early this year, Maruti has promptly introduced the diesel Zen with an accompanying announcement of more diesel versions of their existing car models like Esteem in future. Premier Automobile Delhi Limited (PAL) has launched 1700cc Fiat Uno; Mercedes-Benz India Ltd has added a diesel variant, E250, to their E-class series; Mahindra Ford has flagged off diesel Escort successfully; General Motors India has launched Astra Diesel; and Hindustan Motors and Mitsubhishi joint venture has the diesel Lancer ready.

"Emission regulators have failed to design appropriate emission standards for small diesel cars entering the market," says Roychowdhury. "Though for the purpose of the emission regulations for diesel vehicles, two broad categories in terms of gross weight of the vehicles have been classified. In reality the 2000 emission standards for all exhaust gases for both the categories are the same except for the particulate matter. So a small car is allowed to emit as much as a truck," she adds.

S K Datta, additional director, Central Pollution Control Board (CPCB), points out that as the diesel cars did not comprise a significant category when emission norms for the year 2000 were recommended, separate norms were not notified for diesel cars. At present, emission norms have been notified only for two broad categories of diesel vehicles - heavy vehicles with gross vehicle weight of more than 3.5 tonnes and light duty vehicles weighing less than 3.5 tonnes. Diesel cars fall in the latter category.

"This is a very broad category and gives considerable margin for emissions to the small vehicles like cars. In Europe, they have separate emission norms for diesel cars," says Roychowdhury. It is noteworthy that even in Europe they have not been able to deal with the problem of the toxic particulate matter and nitrogen oxide emissions from diesel vehicles as the limits specified for these from diesel vehicles are three times higher than the limit set for petrol vehicles.

In view of the on-going debate on diesel emission norms, it is clear that though many auto makers are rolling out diesel cars, the diesel technology that they use is far below international standards. It is no surprise, therefore, that CPCB's proposal that Euro norms for diesel cars for 1996 be enforced in India in the year 2000 have not been accepted by the industry so far. These norms are more stringent than what has been currently notified for vehicles with gross vehicle weight below 3.5 tonnes for 2000.

Nationwide consumption of diesel in India is rising at the rate of seven to eight per cent annually. State subsidies and irrational pricing policy of the government is partly to blame for the dieselisation of the economy. Till 1997, the prices of petrol and diesel were centrally administered and diesel and kerosene were subsidised by keeping the price of petrol higher.

According to a finance ministry document, Government Subsidies in India, 1997, the total petroleum subsidy was valued at Rs 18,440 crore in 1996-97 twice more than in the previous year. But increase in only diesel subsidy was phenomenal. It jumped from Rs 430 crore in 1994-95 to a whopping Rs 8,340 crore in 1996. Consequently, diesel consumption increased by 42 per cent between 1992 and 1996. Interestingly, in July 1996 the government made an attempt to increase the diesel prices by 30 per cent to bring down the subsidy level to zero. Subsequently, it was cut by half.

Though a gradual change in the pricing policy only began in 1997, the subsequent strategy of taxing petrol higher to sustain the wide gap in petrol and diesel prices has encouraged the dieselisation trend in Indian cities.

The government's policy to keep diesel prices cheap to help the agricultural sector and to avoid adulteration of diesel with subsidised kerosene did not work. The biggest benefactor of the cheap diesel and subsidised kerosene have been urban consumers. While the transport sector uses 70 per cent of the diesel used in the country, urban population use 70 per cent of the kerosene meant for the rural poor. Even the argument that diesel should be cheaper to keep freight cost low does not augur well. Freight movement by road is more energy inefficient and polluting than rail transport. In 1970-71, 66 per cent of freight traffic was by rail. This fell to 47 per cent by 1991-92, thanks to cheap diesel.

Dieselisation is emerging as a global problem and there is now a growing recognition that diesel consumption in the transport sector should be curbed in the interest of public health.Governments in Europe have focused on improving the quality of diesel drastically and developing fiscal measures to dissuade people from using diesel cars.