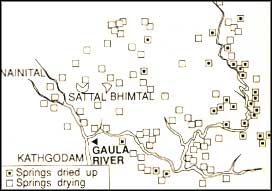 SPRINGS in the Himalaya are drying up on a massive scale, says a detailed study of a 59,723ha catchment area in the Kumaon. The study conducted by geologists K S Valdiya and S K Bartarya of the University of Kumaon -claims that springs in as much as 40 per cent of the villages in the Gaula river catch meet have either completely dried up or their discharge has reduced drastically by 25 to 75 per cent over the past five to 50 years (Mountain Research and Development, Vol 11, No. 3).

The study, however, fails to indicate the cause State of springs of this ecological change, which will inevitably increase the work burden of the women here. Springs are the main source of drinking water in the region.

The causes, say the geologists, can be both natural and human-made. There was a perceptible decline in rainfall in several basins and' pockets of the catchment between 1958 and 1982. At Bhimtal, for instance, average rainfall declined sharply by 34 per cent between 1958-70 and 1971-86.

Simultaneously, the forest cover declined by 13.1 per cent between 1963-64 an 1984 Broadleaved species like oak and rhododendron which generate humus-rich soil have been extensively replaced by pines. Weeds like lantana and cactus like vegetation have taken over vast areas. And 350 kin of roads and 38 new canals have been constructed.