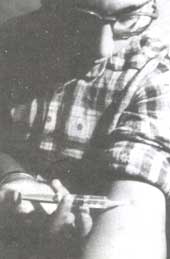 DRUG addiction: every parent's nightmare. What incites their otherwise-normal, teenage children to use drugs? Is it peer-induced, or do genes play an important role? There are several theories on the issue, but none can answer the question satisfactorily.

Unable to find any answers, researchers in the UK are now adopting a different path. They are trying to pinpoint a future drug user during his or her early school years.

A questionnaire that reportedly predicts an adolescent's chances of becoming a drug abuser or an alcoholic will soon be available in the UK, they say.

The designer of the test says results of large-scale screenings may be published one day to inform the worrying parents about the numbers of potential drug abusers at schools in their areas. However, some experts doubt whether the test will actually help the children who are actually facing the risk of substance abuse in the future.

Ian Sutherland of the University of Wales, UK, developed the questionnaire following nine years of "extensive" research into what puts a young person at risk of substance abuse. His work has shown that among various contributing social and psychological factors, low self-esteem, low academic achievement and cases of substance abuse at home are the most important.

The new questionnaire is meant for children between 10 and 13 years of age - typically before they have started to abuse drugs or alcohol. It includes over 47 questions designed to bring out sociological and psychological risk factors. For instance, it asks them about how often they have seen their parents drunk, how often they drink themselves, and whether they have had any trouble with the police.

Further questions in the test ask how strongly the children agree or disagree with statements such as "I think my parents are proud of me", or "I can feel so ashamed of things I have done that I just want to hide". From the answers, teachers can calculate a "substance abuse susceptibility index", a measure of adolescent's overall risk of substance abuse.

The questionnaire is due to be launched soon by Psychological Corporation, a London publishing house.

Pilot studies of almost 10,000 children between 11 and 16 have shown that this test picks up all the major risk factors identified by Sutherland. As yet, however, there have been no long-term studies to reveal how accurate the questionnaire is when it comes to predicting actual outcomes.

Sutherland thinks the tool may also be useful for large-scale screenings in the schools of the UK. However, the idea has rung alarm bells for several educationists.

Mary James, education expert at Cambridge University, thinks that many schools might expel students whose test results indicate them to be potential drug users. "It would force children out on to the streets and into shopping malls where they'd be more exposed to the drug menace," she says.

Andea Kopstein of the us National Institute on Drug Abuse doubts if the questionnaire can be accurate. "I'm concerned that it might label kids unfairly," she adds. And other experts point out that simply knowing a child's potential for substance abuse may not help prevent it. They fear that the new test will be discriminatory in nature. "Often these tools are used as sticks rather than for support," says James. Worse still, say some educationists, labelling a child as a potential drug addict or alcoholic could turn out to be a self-fulfilling prophecy: a dangerous prospect, they all agree.

Sutherland admits that the test could be misused. But he expects the local education authorities to ensure that it is put to "good use".