Earth on verge of mass extinction

Event will be human-induced, warn scientists

THE earth is heading towards mass extinction if researchers at University of California (UC), Berkeley, are to be believed. The last time plant and animal species became extinct on a mass scale was 65 million years ago when dinosaurs perished.

Extinction is a common phenomenon— 99 per cent of the four billion species estimated to have evolved on the earth over the past 3.5 billion years have disappeared. But mass extinctions— rate of extinction of species outpaces that of species origination, resulting in loss of 75 per cent species in a period of one to eight million years—have occurred only five times. The earliest one occurred 443 million years ago; the sixth may arrive in three to 22 centuries, the researchers say. They could not predict the date with certainty because of insufficient data and different rates of extinction for various species.

Previous mass extinctions were caused by factors such as volcanic activity, glacial impact and spike in CO2. The next one will be human-induced, caused by population explosion, habitat destruction or climate change, says the study published in Nature on March 3.

“Recovery from mass extinction episodes occurs on timescales encompassing millions of years. This obviously indicates that frogs, toads and mammals that are facing extinction, and even us, for that matter, will not recover in time to survive into the future,” says lead author Anthony Barnosky, professor of integrative biology at UC, Berkeley.

To ascertain if the present pace of extinction is unusual, the scientists needed to tally two types of data—one from the fossil record that shows forms and features of species through time and the other from historical records compiled by biologists. But tallying the records proved difficult. “It was like comparing two things with different units,” says co-author Elizabeth Ferrer.

To begin with, the fossil record counts only species with identifiable anatomical hard parts that fossilise well. Besides, the International Union for Conservation of Nature (IUCN) has catalogued the conservation status of less than 2.7 per cent of the 1.9 million species that exist at present because of lack of data. For these reasons, the researchers chose to start with a wellstudied taxon—mammals—to arrive at a reliable extinction rate.

An estimated 80 out of 5,570 mammal species have become extinct in the past 500 years. This rate is slower than what was witnessed during the previous mass extinctions termed the Big Five. But that might be an incorrect assessment because “many clades (taxa) are grossly understudied”, says the study’s co-author Charles Marshall.

The scientists concluded that if all threatened species disappear in 100 years, the time taken to reach mass extinction levels for mammals would be a little over three centuries (see table). Marshall, however, says “a major unknown is whether the extinction in well studied taxa can be extrapolated to other species”.

To avoid a catastrophe, concerted conservation efforts would be needed, say the study’s authors. But for that political will would be the deciding factor, says David Jablonski, paleobiologist at University of Chicago. 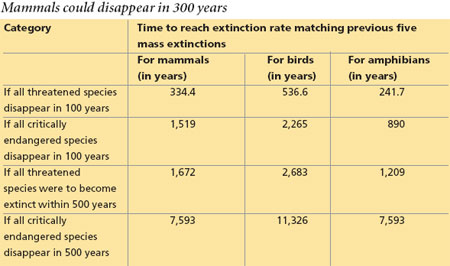