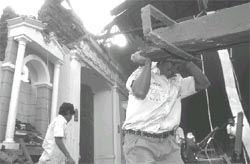 more than 683 people were killed, 2,412 injured and hundreds reported missing when an earthquake hit Guatemala and El Salvador, two central American nations, on January 13, 2001. The highest number of deaths were reported from Santa Tecla, a suburb of San Salvador, the capital city of El Salvador. Following the earthquake, a landslide killed 300 people and left at least 285 missing in Santa Tecla. Environmentalists have blamed the landslide on deforestation. The mudslide brought down an entire hillside in Cordillera del Balsamo, a natural reserve near the city.

For long, environmentalists and municipal officials had urged the government and the Supreme Court to block construction of mansions on the hills, saying that the trees there helped prevent landslides. Hence, the residents of Santa Tecla rightfully blamed the government for the disaster. "The government is responsible for these deaths," said Alfredo Rodriguez, a resident of the suburb.

Development activities are taking place at the cost of the environment, he added.

Only two per cent of El Salvador's original forests remain, making the nation the second-most deforested in the Americas, after Haiti. Despite efforts to create national parks and reserves, the fast-growing population -- now at six million -- continues to encroach on the environment filling ravines with shacks and hillsides with suburban subdivisions. In El Salvador, the environment cannot withstand more degradation without producing irreversible consequences, according to a study conducted by the Salvadoran Foundation for Economic and Social Development. In a region of thin soils and hot tropical sun, deforestation can cause irreversible damage, experts say. The country's 1973 forestry law failed to stop deforestation. A revision of the forestry policy in the 1990s focused on tree plantations and agroforestry. But this was not promoted. "The deforestation of eastern El Salvador is a very grave problem," said Ligia Consino of the environment ministry.

"This nation has far too long ignored the cost of too many people abusing the fragile natural environment in such a small, over-populated country," said Ricardo Navarro, director of an environmental organisation. "There is too much power and too much money behind development interests," he said.

"Removing the trees from Cordillera del Balsamo left the area more vulnerable to mudslides," say experts. Cordillera del Balsamo was declared a natural reserve in 1997. Two years later restrictive new zoning laws were introduced for the area. But developers, backed by the construction lobby, filed a suit to overturn the restrictions, charging that city officials had illegally cancelled existing zoning concessions. Local residents had protested against this lawsuit. The nation's Supreme Court backed the lawsuit, overturned the restrictions and allowed the bulldozers to continue chopping the hillside.

"The site is completely inappropriate, because it is inherently geologically unstable," said Jose Perez, a geologist who has carried out studies of the area for the city and national governments. "Unfortunately, zoning is a battle of vested interests in this country, rather than a rational process," says Perez.

The construction lobby has been quick to refute these allegations. "The people who are blaming the construction work for the landslide are totally irresponsible," said Wenceslaw Creisa, president of the Salvadoran Chamber of Construction, the national construction industry association. "This was a 7.6 magnitude earthquake on the Richter scale and there were plenty of landslides elsewhere. To blame the landslide on construction merely shows that these people do not know what they are talking about," stated Creisa. The government spokesperson also blamed the landslide on the magnitude of the quake and unstable slope.

The El Salvador government has said that the earthquake caused up to us $1 billion damage to its economy. Health officials have warned people not to drink running water for fear that it may be contaminated. Authorities have started a campaign to control disease, fearing that rotting bodies, contaminated water and overcrowded refugee camps could trigger epidemics. At least 24 cases of dengue fever -- a deadly mosquito-borne disease -- have already been reported.