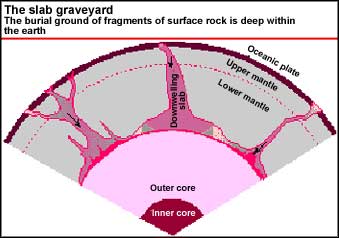 OVER the years, parts of the ocean floor have been sinking below the surface in the stately cycle of plate tectonics. But where do these great slabs of oceanic plate go, and what happens to them inside the earth? Some geologists have suggested that the mantle is divided into two layers, with the slabs confined to the shallow top layer. But many seismologists have argued that the slabs dive to the bottom of the 2,900 km deep mantle, stirring it from top to bottom (Science, Vol 275, No 5300).

According to many seismologists, detailed seismic images of the earth's interior show that the burial ground of these 'lost slabs' is indeed deep within the earth. The discovery suggests that the lower mantle is an integral part of plate tectonics, which recycles old, cold slabs and sends hot rock back towards the surface. New studies done by independent teams using different kinds of data have so impressed geophysicists that the great mantle debate may be over. "There's no doubt; you see the slabs clearly penetrating all the way from the surface to the core-mantle boundary," says seismologist Michael Wysession of Washington University in St Louis, US.

Geologists know that the earth's internal fires - stoked by heat leaking from the care and by radioactive decay in mantle rock - drive slow convection in the mantle. This heat-driven engine reshapes the earth's surface, as tectonic plates move across the surface and then plunge into the interior at subduction zones.

In regions of past subduction, where thousands of kilometres of ocean crust have vanished into the planet's interior, the slabs plunge even deeper into the lower mantle. Studies by Stephen Grand of the University of Texas, US, reveal great slab-like features 500 km wide and many thousands of km long, hanging in the lower mantle below the now-vanished Tethys ocean from the central Mediterranean to Indonesia and under western America from Siberia to South America. These slabs extend from the top to the bottom of the mantle, just above the molten iron core. "It really appears that slabs slide down to the mantle bottom," says Grand.