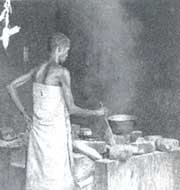 Tanzanian farmers need no longer flee to the cities in search of greener pastures. The spectre of mass migration from rural areas has been haunting the nation ever since it was hit by a severe crop failure early this year due to drought in its northern highlands and the late arrival of rains in the southern parts of the country. The 400,000 refugees from neighbouring Rwanda further deepened the crisis. Now the World Food Programme (WFP), the world's largest multilateral food aid organisation, has offered to provide approximately 37,000 tonnes of maize and beans to 350,000 peasants in Tanzania. "This food assistance will help prevent mass migration to urban areas by helping farmers stay and tend their land until next harvest season (July 1995)," said Holdbrook Arthur, WFP country director for Tanzania.