Eat it bland, eat it pickled

Think of a farmer hoeing or weeding in the sun for hours. He is hungry and thirsty but does not want to stop for refreshment just as yet. He simply reaches for a handful of tiny, pale peach-coloured cucumber-like fruits, growing wild on the farm boundary. The flesh is bland with just a hint of sweetness, but its intense aroma, resembling that of ripe muskmelon, soothes him. The core is watery, sour and tangy—just what one needs to satisfy the cravings. 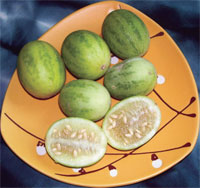 Till about 20 years ago, the wild fruit (Cucumis callosus), known as selni in Maharashtra, kachra in the tribal areas of Madhya Pradesh and demu or pehta in Chhattisgarh, was a regular feature of farm life in the central India. The thin, trailing vines, resembling that of bitter gourd, were found virtually everywhere in farms, yards and on household fences. “We would be tired of uprooting them,” says Sukhwanti Bai, farmer from Multai town in Madhya Pradesh, who showed Down To Earth how to cure the fruit for storage. But farmers would let a few vines remain along the farm boundaries or on the household fence, for it is a ready snack for farm workers, passersby and children from September to November.

When raw, the fruits are used for making chutney (a spicy, tangy dish). The half-ripe fruit can be sundried and stored as dried flakes, called selni khula. In the summer, when vegetables are rare, slices of crispy, fried selni make a delicious addition to monotonous meals.

For the past few years, however, the fruit has been disappearing from farms, thanks to the chemical overload and manicure-perfect weeding necessitated by commercial crops. “Even 10 years ago they were abundant and were sent to city markets in season,” says Gangaram Paikra, a tribal farmer on the outskirts of Ambikapur city in Chhattisgarh. “Now no one except a few elderly matriarchs consider it worth consuming. It is seen as poor man’s food.”

Though wild cucumber is native to India, other than its cooling effect, very little is known about its nutritional property. A few elders recall they used to apply the half-ripe fruit, pounded and heated over hot coals, to painful, inflamed wounds. But the practice is forgotten. Its flavoured seeds are nutritious and have cooling effect, says Bai. But its dried flakes are the real favourite, she adds.