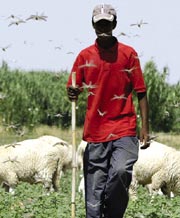 After the recent spate of violence, there is a possibility the West African republic of Sudan is faced with yet another crisis -- a locust invasion. The plague of locusts sweeping south across the Sahara desert has already caused serious crop damage in Mauritania, Mali and Niger and has spread for the first time to Chad.

Nearly a million people in West Africa face famine unless they get international aid to battle the swarms of insects devouring their crops in the region's worst plague in 15 years. The locusts are sweeping into crop-growing areas of the Sahel, on the Sahara's southern fringe, a region whose people are mostly subsistence farmers and whose governments lack the means to fight the infestation. According to experts, a fraction of a swarm can eat the same amount in a day as 10 elephants, 25 camels, or about 2,500 people. "We have to expect a deficit in our cereal crop of around 80 per cent. What's more, 600,000-800,000 people will be affected by famine," said Mohamed Lemine, an official from Mauritania's national agriculture federation.